United Nations - 75 Years Since Its Foundation

Every year on October 24, the United Nations (UN) celebrates the signing of the UN Charter, an important document that laid the foundations of the organization's working principles. 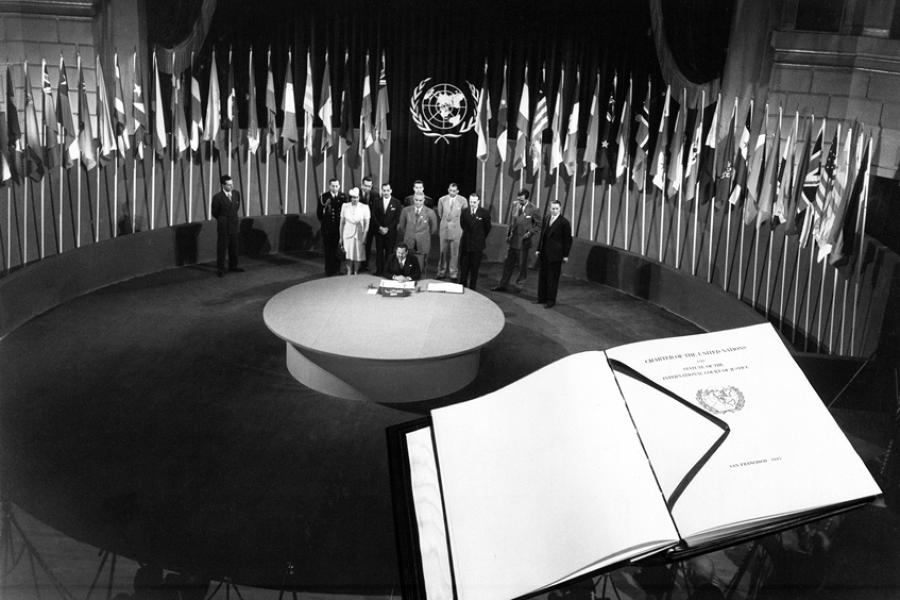 In 1945, right after Second World War, nations around the world decided to change the course of history and committed to working together to maintain peace. The key values of the United Nations - peace, justice, equality and dignity have become the pillars of the UN system's work to ensure a better world for all.

The United Nations celebrates its 75th anniversary in very complex times for the whole world - the fight against the novel COVID19 pandemic. Today, more than ever, the institution must demonstrate its worth and protect the marginalized and needy, defend human rights and ensure that international law is observed. This year, on UN Day, the need for global solidarity is once again reiterated.  Multilateralism is the only way to ensure a fair and impartial world, where poverty is eradicated, human rights are respected and the planet is protected. It is equally important to engage civil society, local public authorities, the business and youth in decision-making.

"During every major crisis and international development milestone in the past 75 years, the United Nations - and the committed international civil servants it employs - have been there.  The United Nations works in every corner of the world and in almost every sector: humanitarian, development and peace. Neither the United Nations nor its Member State pool is capable of giving up. We must join our efforts, keep old commitments and make new ones to ensure that we are in the best joint position to offer a better future to everyone - without leaving anyone behind,” mentioned Simon Springett, UN Moldova Resident Coordinator, in his anniversary message.

At the beginning of 2020, UN Secretary-General Antonio Guterres launched the largest global conversation on the occasion of the 75th anniversary of the UN to learn the vision of people everywhere about what the priorities of governments should be in the next 25 years. More than one million people took part in this survey, including over 8,400 Moldovans. At the UN General Assembly in September 2020, the results of the survey were made public, with Member State leaders urged to take citizens' views into account. Moldovan respondents believe that the country's priorities for the next 25 years should be: more employment opportunities, increased access to health services, and respect for related human rights. And ensuring access to healthcare and increasing investment in education and youth programs should be the world's priorities for a better recovery from the COVID-19 pandemic.

The results of the UN75 survey for the Republic of Moldova will be presented during the week dedicated to the UN anniversary, October 24-31. During the same period, the UN Moldova agencies plan to carry out a number of activities dedicated to the organization's anniversary, mostly online. Starting with October 20, Chisinau residents can visit the photo exhibition in Stefan cel Mare si Sfant Park to find out more details about the UN agencies present in Moldova as well as interesting things about their activities. The exhibition will run until November 1, 2020. A series of posts with curiosities and interesting, but less known, things about the United Nations will be launched as well. We will also make public the confessions of the UN partners about the collaboration with its agencies, the support provided, and the challenges they have overcome with their support. Therefore, we invite all citizens to follow carefully the official pages of the UN Moldova and its agencies in the social media.

The Republic of Moldova became part of the UN system on March 2, 1992, and in September 2015, alongside other 192 member states, adopted the 2030 Agenda for Sustainable Development and implicitly the Sustainable Development Goals.  The UN Moldova Country Team is made up of 23 specialized UN agencies, both resident and non-resident.