The United Nations in Moldova in partnership with Public Authorities, the International Community and the Civil Society is joining the UN Secretary-General’s UNiTE by 2030 to End Violence against Women campaign that marks the 16 Days of Activism against Gender-based Violence (25 November to 10 December 2020) under the global theme, “Orange the World: Fund, Respond, Prevent, Collect!". 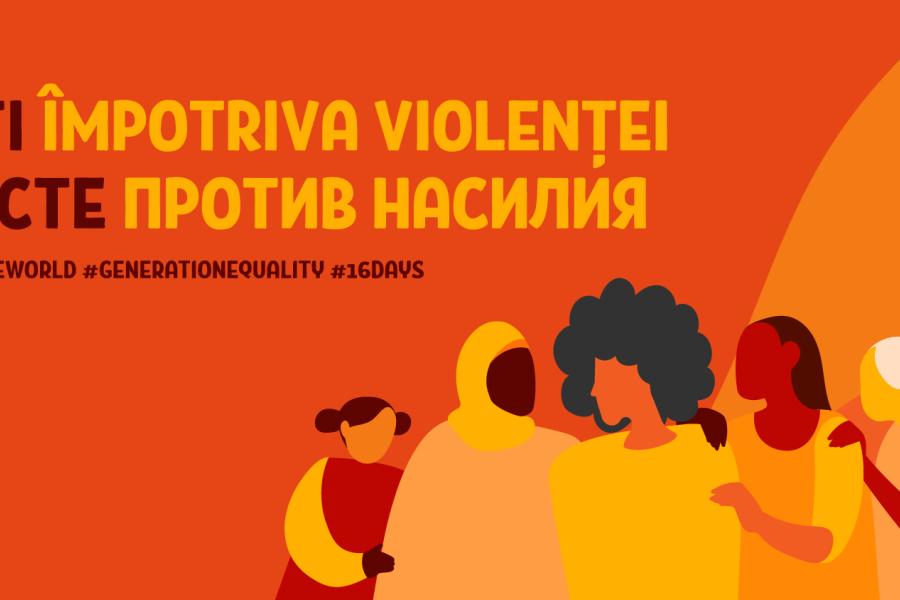 In the Republic of Moldova, the restrictions imposed due to the COVID-19 pandemic contributed to the increase in the number of cases of violence against women. According to the data, available based on Women and Girls' Trust Line calls report, administered by the International Center „La Strada”, since the beginning of the pandemic the number of women who reported cases of violence, has increased by 35%. Women survivors of violence are mainly in need of essential products and money, a shelter and access to healthcare, psychological and legal support services.

The 16 Days of Activism against Gender-based Violence Campaign in the Republic of Moldova will be focused on the importance of prevention as well as on the availability of services for the survivors of violence that are essential in the COVID-19 response. In the frames of the campaign, the United Nations in Moldova jointly with the Government, the Parliament, CSO partners and international community in line with the moto of the global campaign “Orange the World: Fund, Respond, Prevent, Collect!” and under the local slogan “United against violence” is planning to organize a series of online and offline activities, media and social media campaigns to challenge gender stereotypes, raise awareness about the importance of availability of essential services and to encourage women who are suffering of violence to speak up and report the cases.

Under the slogan “Orange the world” and with the aim to raise the public awareness about  violence against women, the 16 Days of Activism against Gender-Based Violence in the Republic of Moldova, will be launched by the United Nations Entity for Gender Equality and the Empowerment of Women (UN Women) in Moldova on 25th of November with the illumination in orange of the Parliament building, as a sign of solidarity for a brighter future. Besides the Parliament, the Ministry of the Internal Affairs, and the Chisinau Water Tower, will be lightened in orange, as well as the building of the State University "Bogdan Petriceicu Hasdeu" in Cahul and the "Grigore Vieru" Square in Ungheni.

In Gagauzia, UNDP Moldova will inaugurate a newly established center for survivors of violence and will conduct a public Gender Dialogue in Comrat.

Lessons on Elimination of Violence Against Women and Gender-Based Violence in 12 Vocational Education and Training Institutions in Chisinau and regions will be organized by UNFPA Moldova in partnership with UN Women Moldova. As well, a bread baking atelier for men, called ”Tata pâine alba coace” will be organised by UNFPA on behalf of EU4Gender implemented jointly by UNWomen and UNFPA. Another campaign is: Addressing Gender-Based Violence through private sector engagement will be conducted by UNFPA Moldova.

The results of monitoring of the sexism and violence against women in Presidential elections will be presented by UN Women Moldova and Gender Equality Platform in the frames of a Press Conference. Post-elections conclusions and recommendations related to the gender-based violence in elections will be also highlighted through the online campaign implemented in the frames of UNDP Moldova partnership with the Central Electoral Commission.

Besides the above mentioned, a series of online events aimed to combat gender stereotypes and support survivors of violence can be followed in Social Media:

Four live sessions with psychologists on the topics related to ending of violence against women and girls as well as a Live Discussion session on Elimination of Violence Against Women and Women's Rights with participation of opinion leaders will be available on UN Women Moldova page on Facebook. Also, the testimonials and informative videos on the issues of gender-based violence produced  jointly by UN Women Moldova and OHCHR Moldova could be followed on social media.

In continuation of the previous years’ experience, the 16 Days of Activism Against Gender-Based Violence campaign implemented by UN Women Moldova will engage youth in creative arts activities. This year will be organized 5 Graffiti Workshops in Chisinau and regions and 3 professional murals dedicated to the elimination of gender-based violence will be created during the campaign and by the end of December.

To support the voices that are not being heard, we urge women and men to take a stand, and to follow and share the Social Media posts on UN Women Moldova and UN Moldova pages, using the hashtags #OrangeTheWorld #GenerationEquality #16Days; and to “orange” their workplaces and outfits.

Together we are united against violence!

Note: In the Republic of Moldova, the 16 Days campaign is organized for the 19th consecutive year by the Government, local authorities, international organizations, and the civil society. The color of the campaign is orange, which symbolizes a bright future for each girl and woman.