Assessment of the impact of COVID-19 on refugees, asylum-seekers and stateless persons in the Republic of Moldova

UNHCR conducted an assessment of the impact of the pandemic on persons of concern. This report includes a summary of the key findings which will guide UNHCR’s further action to ensure an appropriate protection response. The assessment focused on asylum-seekers accommodated in the Temporary Accommodation Centre (TAC) and in private accommodation, as well as refugees and stateless persons residing in different regions of the country. The stateless group includes persons with official stateless status as well as applicants and those at risk of statelessness. The respondents were selected randomly from the UNHCR database, bearing in mind the approximate proportion of the three groups in the overall registered population in the country and the gender breakdown within the groups. The assessment was conducted from 1 to 15 July by telephone by UNHCR and its partners. It involved in total, 99 individuals representing 99 households, 15 of the respondents were asylum-seekers, 66 refugees and 18 stateless persons of whom 37 were women and 62 men. Altogether, the 99 households comprised 296 individuals: 26 asylum-seekers, 114 refugees, 21 stateless persons, 132 Moldovan citizens and 3 other foreigners. 30 households consisted of single individuals. Among the respondents, 40% stated that they had at least one specific need or vulnerability, including 12 persons with disabilities, 13 with medical conditions and 9 elderly persons (60+). In addition, 41 household members had specific needs, including medical conditions, disabilities and elderly family members. Out of 18 stateless persons, 11 reported a disability and 5 are elderly. Out of 66 refugee respondents, 24 reported specific needs, most of which were either related to medical conditions or an elderly age. Out of 15 asylum-seeking respondents, 4 reported a medical condition. 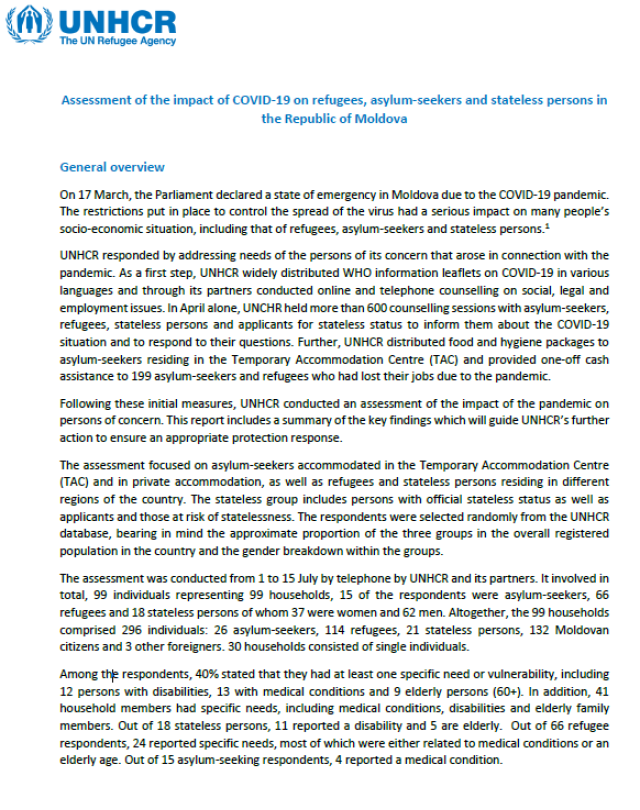