Illegal payments made in education, electoral gifts, corruption in the customs system and for issuing of driving licenses are just some of the topics tackled by a series of 16 videos developed by young people who are part of the “Anticorruption Ideas Club”, organized by UNDP and National Anticorruption Centre (NAC), in partnership with the Media Center for Youth. 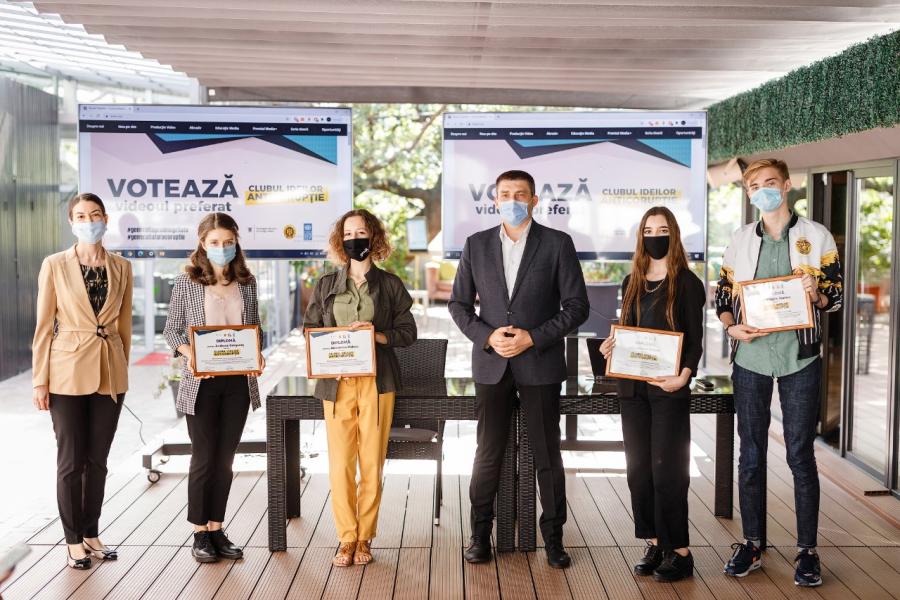 The young people aim to draw people’s attention to areas affected by corruption and to propose solutions for reducing this phenomenon. The best materials, selected by the general public, were awarded today and the winners got one of the five prizes: a smartwatch, two portable speakers and two power banks. As well, based on the number of votes, three young people became members of the anticorruption volunteers’ team of NAC.

The Anticorruption Ideas Club was created during April – May 2020 and has 70 members from all districts of the country. All the young people attended trainings on corruption prevention and the importance of integrity, learned how to formulate anticorruption messages that would reach out to the public, and developed media products, video spots, images that would express their pro-integrity ideas. Sixteen participants registered their products in this contest. The voting was organized via the www.tineri platform. Daniela Golban, Ariana Osipov, Cătălin Tcaciuc, Andreea Covganeț and Alexandra Pâslaru are the winners of the contest.

One of the winners, Cătălin Tcaciuc (16 years old), a student at the Theoretical Lyceum “Constantin Stere” from Soroca, managed to gather 2346 votes for his video product. Cătălin chose a rather innovative method for promoting his pro-integrity message – he developed and shot a video in rap style, in which he speaks about corruption in the customs system. The young man conducted a real campaign on social media and in the local newspaper from Soroca to promote his video.

“The participation in the Anticorruption Ideas Club and in the video products’ contest was really special, incredible and awesome. My involvement in promoting integrity does not end with this contest; I will continue talking about this in my circle of friends, and in all other circles of people I am a part of, at school and in the community,” states Cătălin.

The video produced by Daniela Golban (17 years old), ä student at the Theoretical Lyceum “Ștefan - Vodă" from Ștefan –Vodă town, gathered 3000 votes which assured her first prize in the video products’ contest. According to her, the participation in the “Anticorruption Ideas Club” helped her understand that corruption prevention depends on each of us:

“I have noticed that my own attitude to and perception of corruption has changed. Thanks to all the trainings, I found out how to react when I witness such cases. It is regretful that some people prefer using bribes instead of fighting for common moral principles and values, which would help our country to develop and prosper.”

Olga Crivoliubic, UNDP Moldova Project Manager, is fully confident that all the participants of the “Anticorruption Ideas Club” will become integrity messengers in their communities. “Education of youth in the spirit of integrity values and their involvement and engagement may become one of the most efficient tools for preventing corruption. We encourage you to continue be active and engaged to convey everything you have learned to your peers and friends.”

The “Anticorruption Ideas Club” is under the scope of the “Curbing corruption and building sustainable integrity in the Republic of Moldova” project, implemented by UNDP in partnership with the National Anticorruption Center, with the financial support provided by the Norwegian Ministry of Foreign Affairs.