31 August 1989 Street of Chisinau capital city will be redesigned, becoming a green corridor

31 August 1989 Street of Chisinau will be redesigned, becoming a green corridor that will connect Valea Trandafirilor Park with Dendrariu Park. This initiative takes place thanks to the support provided by UNDP Moldova for the City Hall of Chisinau, within the project "Sustainable Green Cities for Moldova", funded by the Global Environment Facility (GEF). 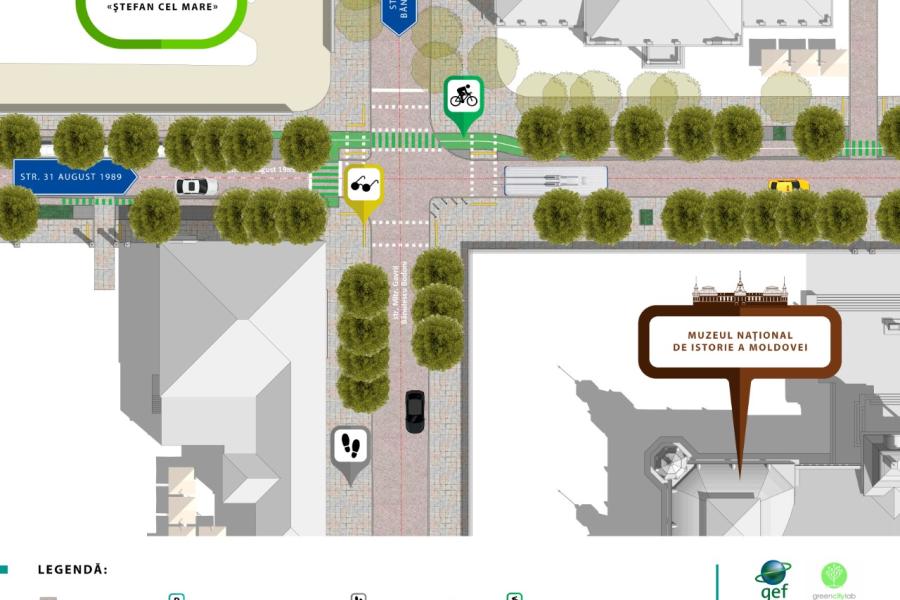 31 August 1989 Street will be replanned according to the provisions of the Street Design Guide, developed in 2019 with the support of UNDP Moldova. The guide offers recommendations and suggests good practices for transforming the streets of Chisinau as public spaces that offer to its residents the possibility to use all mobility options, including walking. Thus, comfort for all people – pedestrians, cyclists, wheelchair users – shall be ensured and traffic, generated by public and private transport, shall be streamlined and accommodated.

"Due to its location, this street has a high potential for pedestrians and cycling, which is now under-exploited. The benefits of this transformation will be enjoyed not only by the inhabitants of the areas close to these parks, but also by the entire city, as an alternative mobility connection to the Center will be ensured and thus the pressure on the public and private transport system will be reduced," says Ion Ceban, general mayor of Chisinau Municipality.

To make more efficient use of the space, the traffic lane for road transport will be kept, and the parking spaces will be arranged parallel to the road. At the same time, a two-way bicycle lane will be made available.

"To encourage urban mobility, it is necessary to change the paradigm of using urban space by focusing on humans, not on cars. Promoting environmentally friendly vehicles, the efficient use of public transport and the development of alternative transport, starts with the correct planning of the streets," mentioned Inga Podoroghin, Programme Specialist at UNDP Moldova.

The redesign plan of the street was developed by a company contracted by UNDP, and the redevelopment will start in September 2020, from the financing provided by European Bank for Reconstruction and Development (EBRD) and European Investment Bank (EIB).

A similar corridor shall be created between Valea Morilor Park and Riscani neighborhood, which will cross 31 August, 1989, thus creating a city-level network for alternative transport that will increase the comfort of urban life, reduce pressure on the public transport system and health, and will strengthen the ecological balance in the city.

Now, 31 August 1989 Street is used primarily as a private motorized transport artery. The length of the street does not exceed 3 km and on a busy day it houses over 800 cars, whose parking is not systematized and regulated. The space for alternative transport (bicycle, rollers, individual electric transport) is completely missing.