Corruption remains to be a serious problem and public agents are generally not sanctioned for the lack of professional integrity and ethics. This opinion is expressed by the majority of the respondents participating in a sociological study for assessing the impact of the National Integrity and Anti-corruption Strategy for 2017-2020 (NIAS), conducted by the Center for Social Research and Marketing „CBS-Research” and commissioned by UNDP. 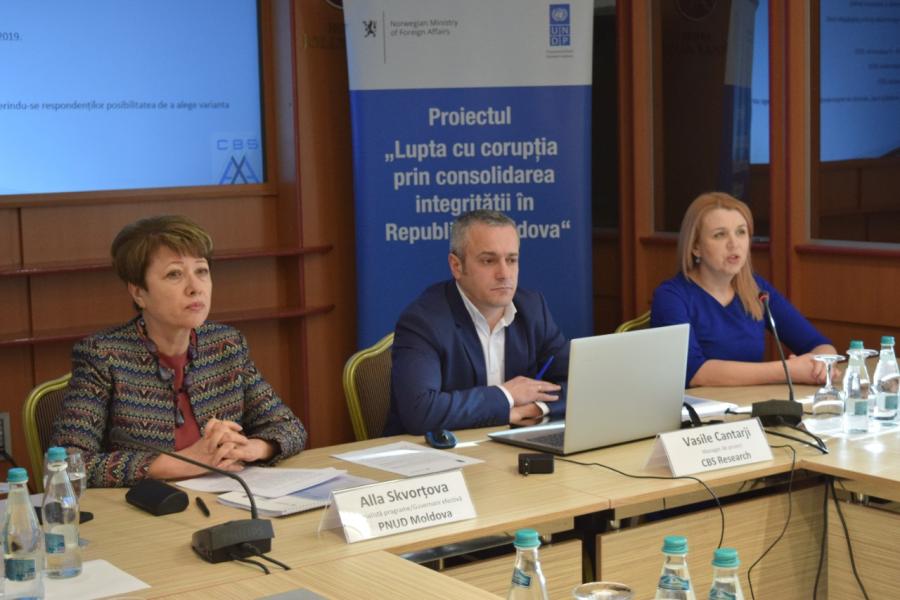 Over 70% of population and over 60% of business representatives (about 2/3 out of both categories in 2017) consider corruption to be a very serious problem, without any differences by the respondents’ gender.

According to the survey data, the estimated volume of bribe accounted in 2019 for 516 million MDL (319,4 million from the general population and 197,3 million from economic units). In 2017 the respective indicator accounted for 405 million MDL.

At the same time, the general incidence of informal payments is relatively low. According to the survey data, 7% of the respondents from the general population and 4.7% of the business units have recognized that they have offered informal payments during the last year. The average number of times a person from the general population offered a bribe is 5.4 times per year (as compared to 3.7 in 2017), and in case of a business unit – 3.5 times (as compared to 6.1 in 2017).

At the same time, the level of population’s intolerance to corruption has increased. Hence, about 62% of the general population (as compared to 45% in 2017) and 83% of business units (as compared to 61% in 2017) consider any corruption situation to be unacceptable and state that they do not accept to give bribes, regardless of the situation and personal benefit. The survey data reveal that general population (73% of the respondents) and business units (80%) are aware of the fact that bribing implies a punishment for both involved parties. On average, about 87% of the survey respondents stated that if encountering such situations, they would most probably/surely report the corruption acts to the anticorruption agencies through different means.

Corruption is perceived as a very serious problem in the Republic of Moldova by public agents too. On the other hand, the public service in general, and the institutions in which the public agents were working when the survey was carried out, have been positively assessed by them from the viewpoint of observing the principles of ethics and integrity.

According to the public agents participating in the survey, small salaries in the public sector and the mentality of asking for and giving bribes and/or gifts are among the main causes generating corruption.

The general perception of the interviewed persons is that the employees of the state institutions are not sanctioned by their heads for the lack of professional integrity and ethics. Over 70% of the Survey respondents from the general population think that public agents are rarely, very rarely or never punished for corruption. In case of business units – this indicator accounts for 80%.

The main factors which would determine citizens to get involved in the activities to decrease corruption are the strong belief that they would be protected if they denounce a public agent for corruption, as well as the guarantee for an independent justice.

The sociological survey was carried out under the “Curbing Corruption and Building Sustainable Integrity in the Republic of Moldova” project, implemented by UNDP in collaboration with the National Anticorruption Center and with the financial support of the Norwegian Ministry of Foreign Affairs. The project is implemented during 2019-2021 and aims to develop a sustainable integrity and anticorruption system within public and private sectors, as well as within the civil society.