With support of the Austrian Development Agency and UNDP, 990 households will be equipped with smoke detectors

990 smoke detectors will be installed in the houses of vulnerable families in the districts of Cantemir, Criuleni, Hincesti, Leova and Ungheni. They were procured in the framework of the Climate and Disaster Risk Reduction Project, funded by the Austrian Development Agency (ADA) with funds of the Austrian Development Cooperation and implemented by UNDP. The smoke detectors, along with informative materials on disaster risk prevention measures, will be distributed during the “Safe Home - Saved Life” Campaign, carried out by the General Inspectorate for Emergency Situations of the Ministry of Interiors. 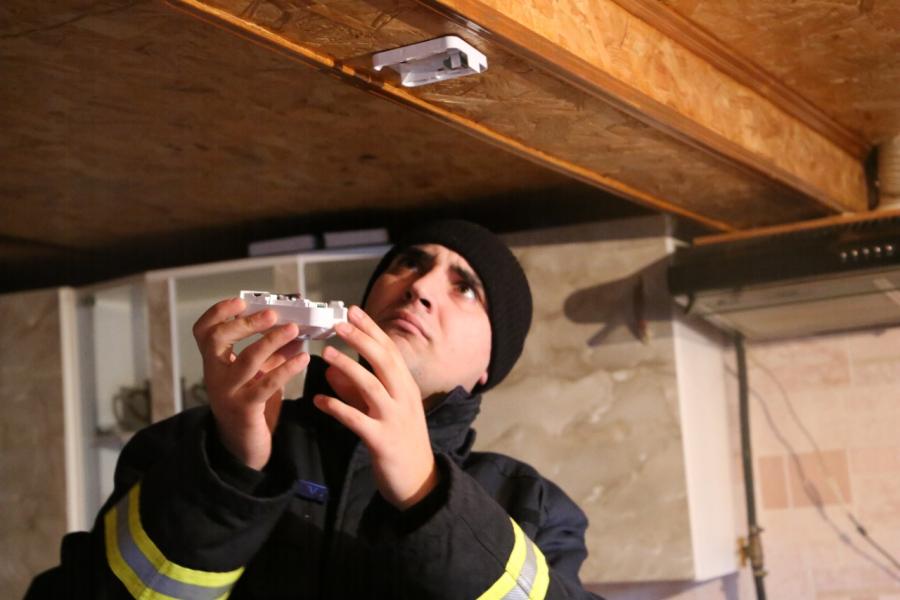 The head of the Cooperation Office of the Austrian Development Agency in Chisinau, Alexander Karner noted that this donation is part of ADA’s broader programme of assistance to the Republic of Moldova, aiming to prevent and reduce climate and disaster risks. "Lives and assets could be saved through anticipation of risks and observance of safety rules. Smoke detectors would be an effective solution to prevent fires, which number grows alarmingly in the cold period of the year: the detectors will promptly warn about fire hazard. Through this initiative, we aim to promote preventive culture, improve safety of homes and save lives.”

During the next few weeks, fire and rescue teams will install the devices in houses of elderly people, families with many children, disabled people or low-income families from the 5 target districts. They will also train the owners on how to operate the devices and about other measures to prevent and protect them against fires.

Smoke detectors are installed on the ceilings and promptly react to smoke or gas, producing a strong sound that warns of danger. Firefighters say that the risk of fires is higher during the cold season. According to official statistics, approximately 1,545 fires were recorded from the beginning of the year in Moldova, with over 111 victims, including 5 children, and material losses of more than 68 million 630 MDL. Most commonly fires are caused by defective stoves and other heaters. 54% of fires are caused by improvised heaters. According to GIES data, in six firefighting cases, smoke detectors were triggered, thus saving people's houses.

In the next two years, through the Climate and Disaster Risk Reduction Project, the ADA and UNDP will contribute to the creation, equipment and staffing  of the community-based firefighting stations in 5 beneficiary communities.  Climate change adaptation and disaster risk management priorities will be integrated into the local development plans of the five communities, in a participatory and gender-sensitive way. At the same time, precipitation water storage reservoirs will be built in the districts of Cantemir, Criuleni, Hincesti, Leova and Ungheni, as a means to increase resilience and adaptability of rural communities to climate change and disasters.