UNICEF, in partnership with the Ministry of Education of Moldova, is supporting children to integrate into schools.

Sasha giggles as she runs down the school corridor to her brother, a blue helium balloon bouncing behind her. Just three months earlier, the siblings were in Zhytomyr, north-west Ukraine, waking up to air raid sirens and news of missile attacks.

Most Ukrainian men are banned from leaving the country. Their father worked as a taxi driver transporting people safely to their destinations. But as war broke out and entire streets were destroyed, the children and their mother were forced to flee their city and cross the border into Moldova. Safety wasn’t guaranteed.

Sasha places her palms face down on her school desk, holding it tight. She remembers her former school and is worried about it now.

”I miss school so much because that’s where my friends were. But most of all, I miss home and my father,” says Sasha, her voice filled with emotion. “I wish that all children in Ukraine could stay alive, be healthy, and live in peace.” 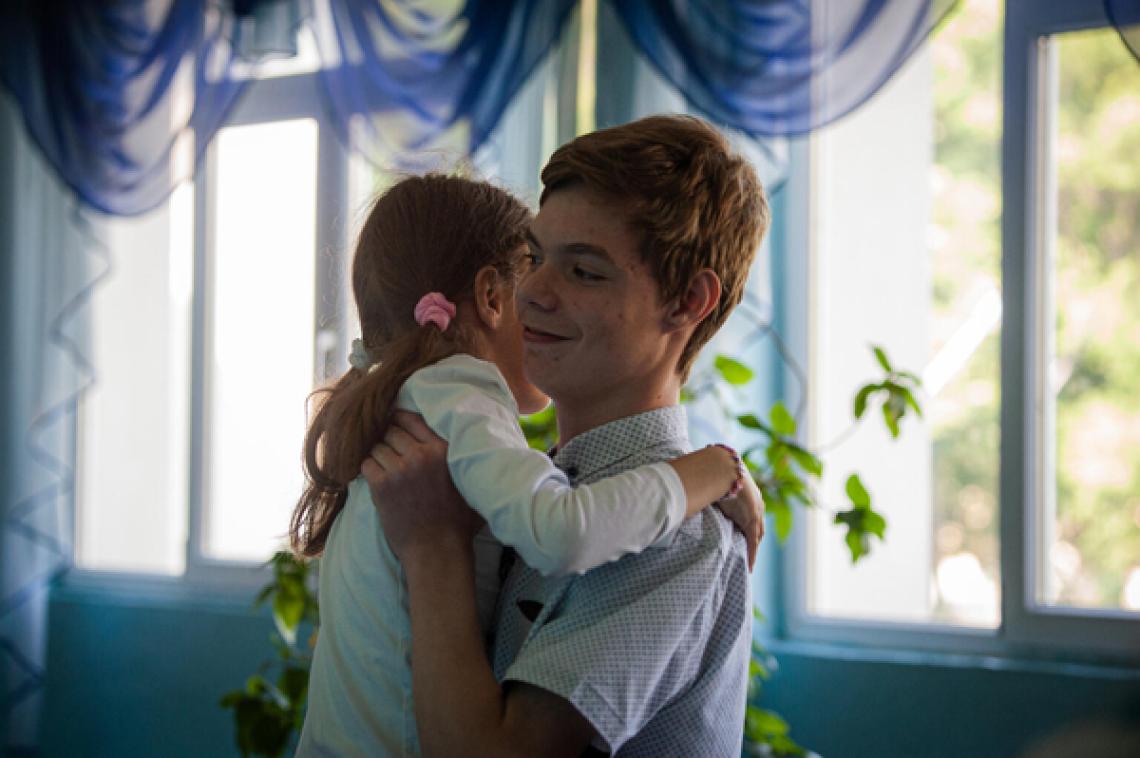 Vanea says everyone he knows is now more serious about life.

Sasha turns to her 14-year-old brother, Vanea, and he slips off his headphones. Vanea is a fan of the band Samurai from a popular video game. Pausing briefly to glance out of the window, he says the situation in Ukraine has hardened everyone he knows who has experienced the war.

“Life has changed a lot,” says Vanea. “I’ve lost a lot of friends, and it’s very stressful. My friends have had to mature. Everyone I speak with is more serious about life.”

Children from Ukraine should be in school, but not all are. At least one in six UNICEF-supported ‘Safe Schools’ in eastern Ukraine has been damaged or destroyed since the start of the war. Across the country, schools continue to come under fire. 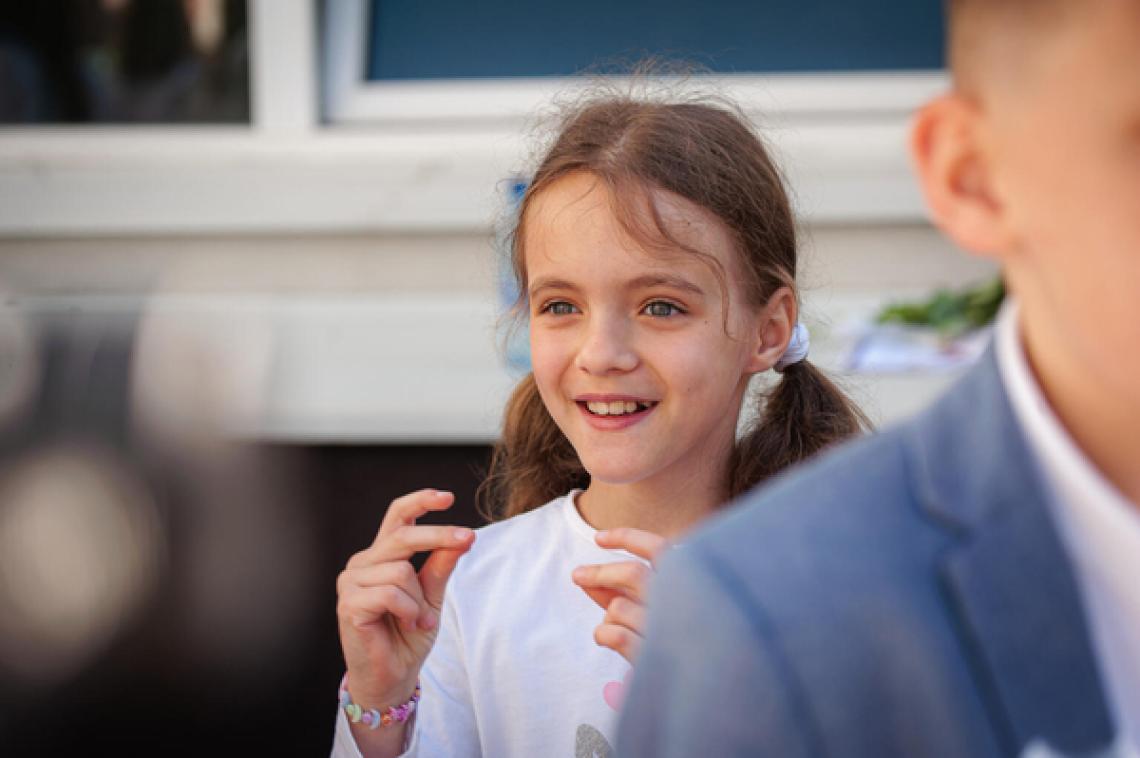 Sasha has settled in well at her new school in Moldova, with thanks to support from dedicated teachers and UNICEF.

In Moldova, the siblings attend a central city school that is swelling with the additional students from Ukraine. “It’s nice at this school, and I settled in quickly. I haven’t been bullied, and I’ve found people I am comfortable around,” says Vanea.

Vanea turns protectively towards his little sister, who is still playing with her helium balloon, and adds: “Sasha has adapted well, too. Everyone loves her, adores her, and she tries really hard in class.”

Children are often skilled at adapting to new situations, but refugee children need to be carefully supported. UNICEF, in partnership with the Ministry of Education of Moldova, has been supporting children to integrate into schools.

Principal Marina Saltanovscaia says the community is dedicated to supporting children from Ukraine. 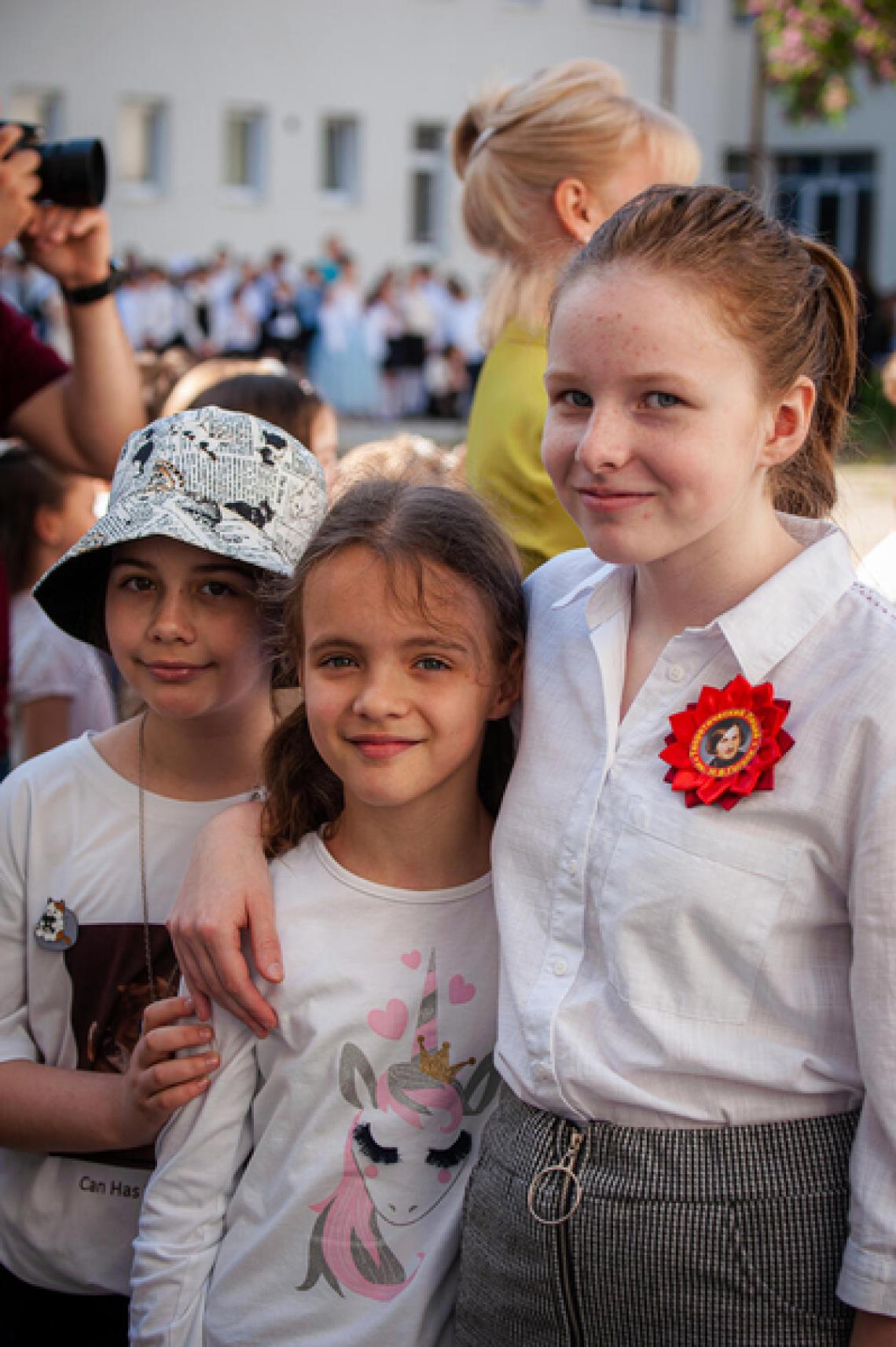 Principal Marina Saltanovscaia stands in the shade of an acacia tree in the schoolyard. She says that when the war started on 24 February 2022, refugee parents were already contacting them. The school quickly recognized that it had to support children who had lost everything – their homes, friends and schools.

”Our teachers are dedicated to finding solutions for children so that they do not feel inferior or different,” Principal Saltanovscaia points out. “Sasha and Vanea came here with their mother and grandmother and at first, the children were quite reserved. They didn’t know if other children would accept them, but they integrated quickly into our community.” 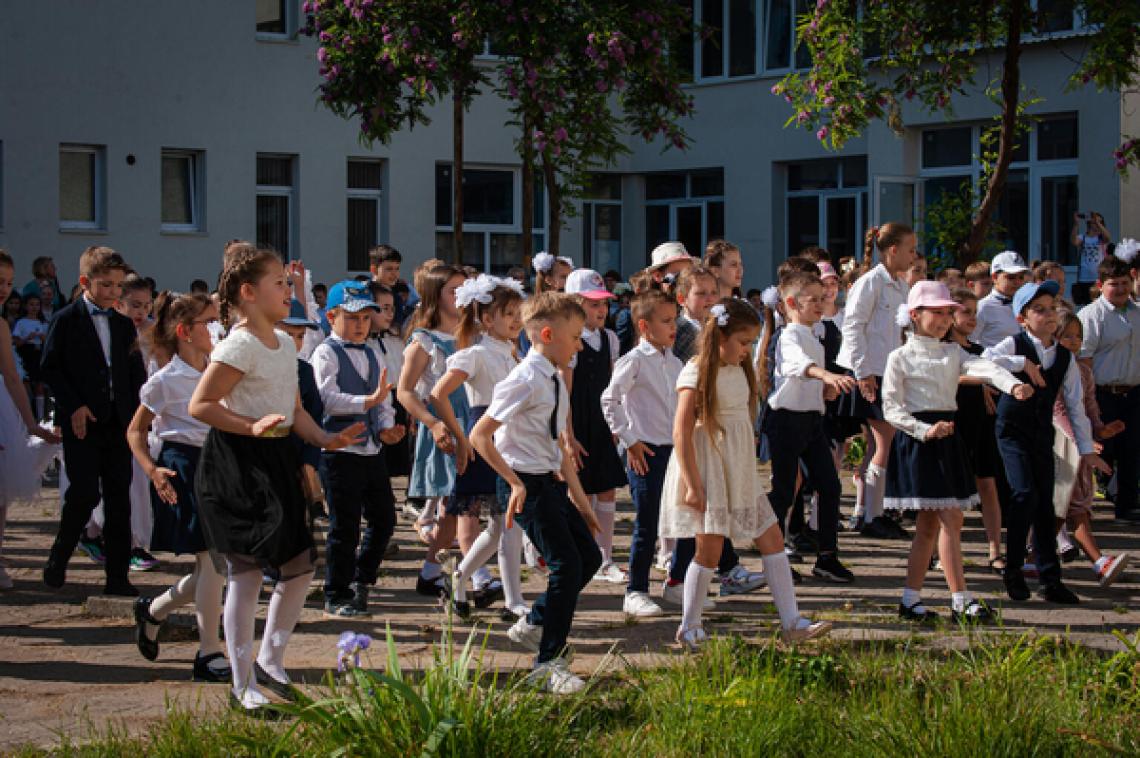 Children celebrate the last day of the school term.

Since February, 39 families from Ukraine have joined the school and today, the Ukrainian refugee children celebrate the last day of school in a sea of helium balloons and with music and laughter.

Children race into the classrooms holding bouquets of brightly coloured flowers for their teachers. Parents snap photos of their daughters with white ribbons in their hair and elaborate sashes, and boys in pressed shirts and sharp blazers. It’s the last day of the school year and a three-month break for children and teachers lies ahead. 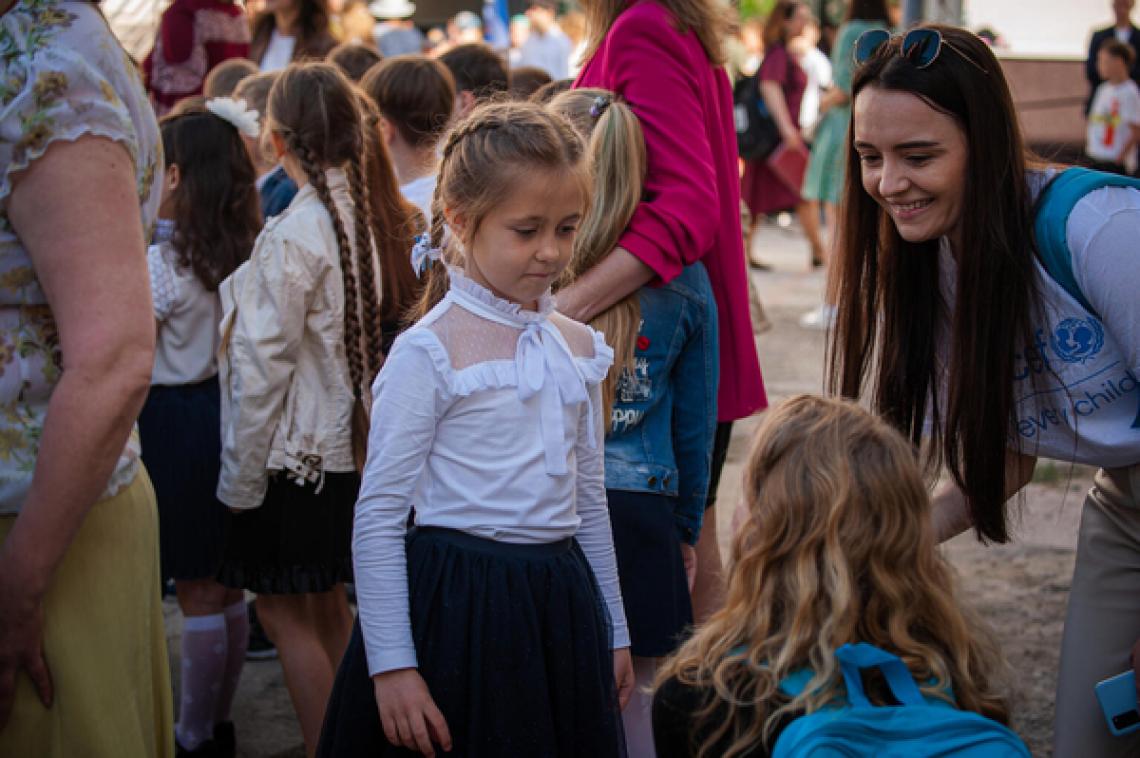 Seven-year-old Rita from Odessa introduces herself to Adriana and Shelley from UNICEF.

For the first 10 minutes of an assembly, students line up excitedly and teachers monitor from behind, on the look-out for troublemakers. As the music blares from a speaker, children step up to receive awards, and when the speeches start, the fidgeters and squirmers can no longer contain themselves. Teachers are on the pounce.

A girl in blue patent-leather shoes, blue ribboned socks, and two perfect plaits stands motionless. Her eyes are focused on everything before her. Suddenly, she spins around and grins. “Prevet”, “Hi, I’m Rita”. Seven-year-old Rita had learned a few English words in Odessa, Ukraine.

Rita’s parents haven’t granted permission for an interview, but she is allowed to be photographed. We stand next to her as she nods her plaits in time with the beat. 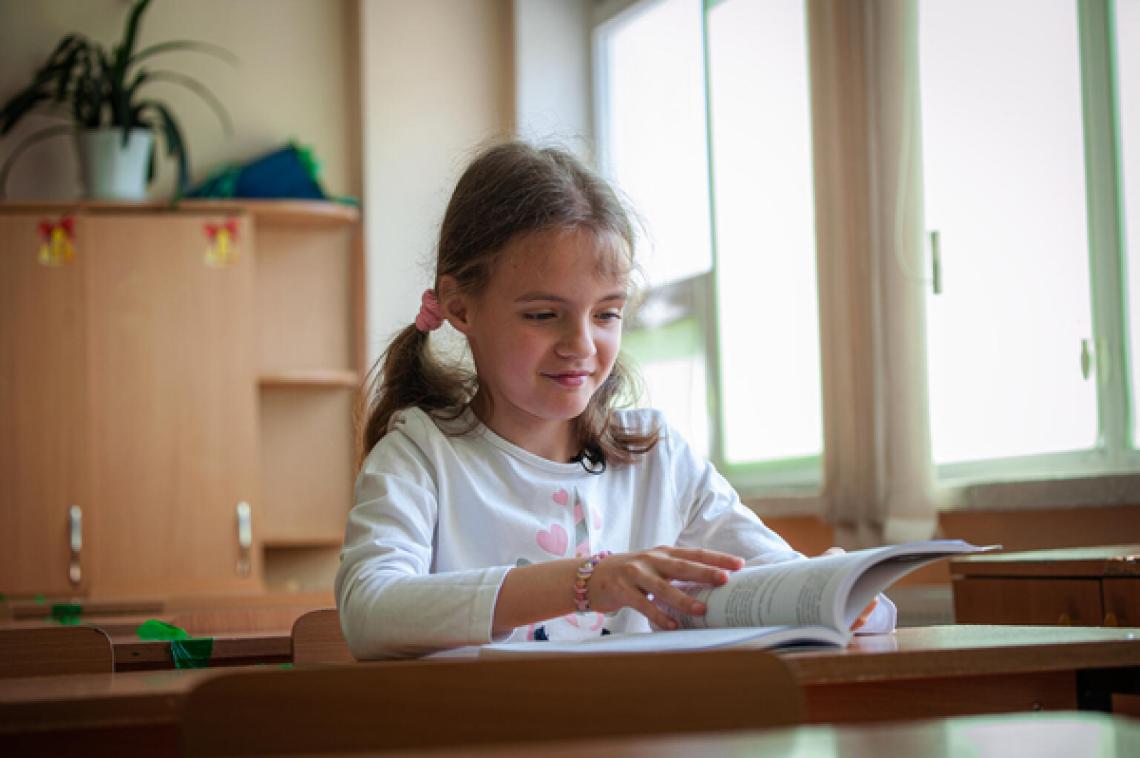 Sasha dreams of being an actress and making TikTok videos.

Since the onset of war, over 7.7 million people have fled Ukraine. For many refugee children and parents, their lives are uncertain, and they are still traumatized by what they have seen. “I want to go home, and the first thing I will do is hug my dog,” says Vanea. But his mother Alina acknowledges they have lost too much in Ukraine: “We will move to Belgium. We want to start new lives in a new country.”

School is a constant, providing children with a safe space to learn, make new friends and chase their dreams. Vanea wants to be a video game designer, while Sasha dreams of being an actress. “I like filming and I want to create TikToks,” she says hopefully.

The siblings hug each other tight in the school corridor. School is where they, and all children, should be. 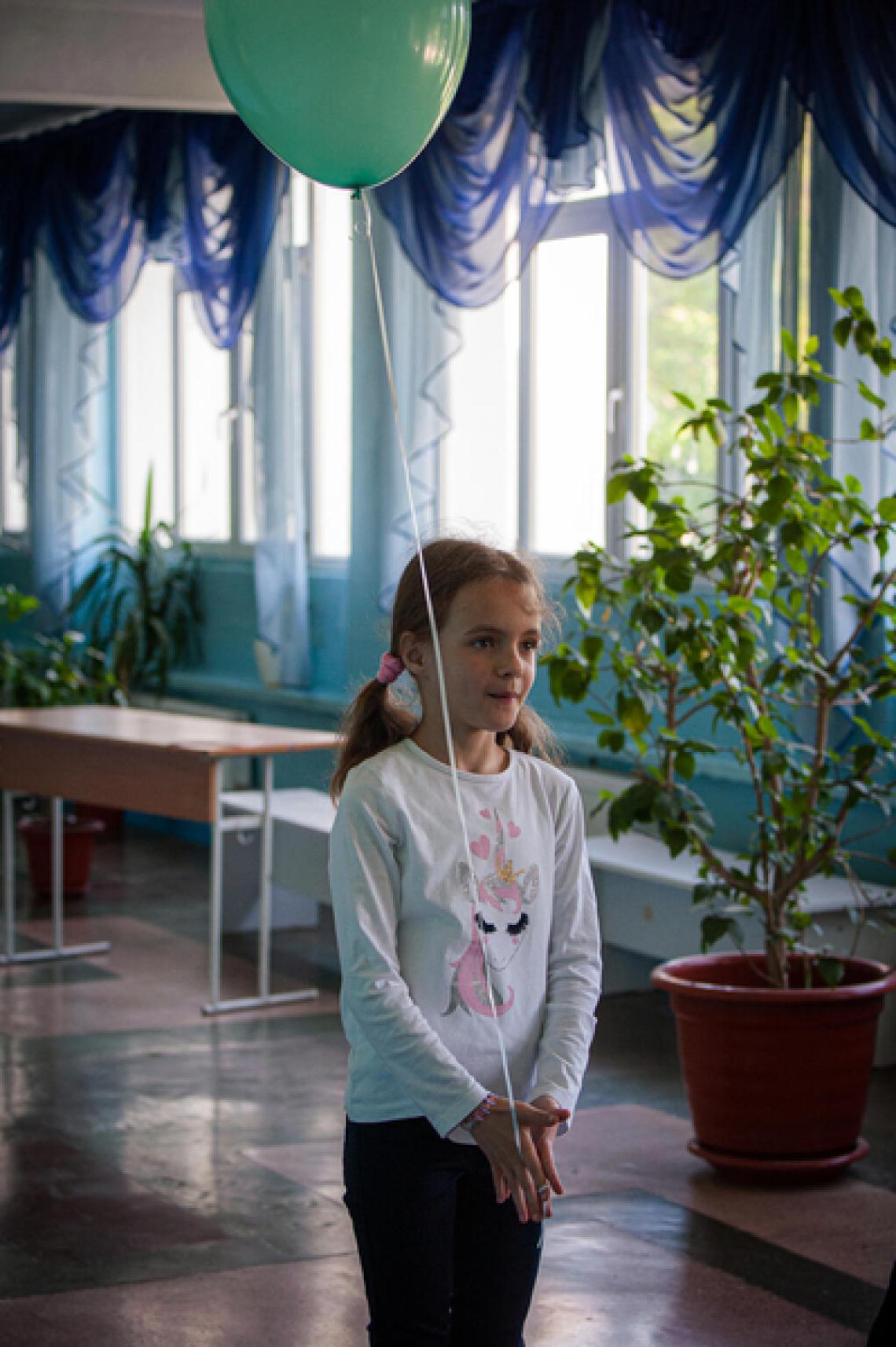