Thanks to them, tens of adults living in the Youth neighbourhood, where the venue is located, and the high school administration have been mobilised.  The initiative is part of the YouCreate programme carried out with the support of the Joint Fund for Developing Youth Centres and Strengthened Participation and Civic Engagement of Young People, the Ministry of Education and Research, the Swiss Cooperation Office and UNFPA Moldova. The creative initiatives are coordinated by Terre des hommes (Tdh) Moldova and have reached their third edition this year.

Mihai and her teammates, at the local outdoor youth-friendly space

Mihail Golovaciuc (16 years old), a 10th-grade student at ‘Gheorghe Asachi’ High School is one of the project organisers and this community mobilisation project is the first he has contributed to.  Mihail became involved in local initiatives once he joined the Youth Centre in Ungheni. It happened in the spring of 2021, and since then, the young man has been building his own path to civic engagement with the help and support of the centre’s team.

‘I got convinced that we, young people from the centre, can cooperate efficiently and I got more actively involved and eventually became the deputy leader of the initiative group.  The youth centre is the place where the most innovative ideas are born’, the adolescent says.

In 2021, together with other 10 colleagues of the initiative group, Mihail intended to obtain a grant through YouCreate to set up a youth-friendly venue for young people in the courtyard of his high school.  They have managed to see their plans come true just in several months – a modern and well-equipped venue with a few comfortable benches, some of them being made by themselves, a small pergola where several advertisements were posted and a place for taking pictures with friends or colleagues.

Mihail says that it was not an easy journey to reach the result and the secret of success was that they managed to mobilise not only young people but tens of adults in the community.

In the beginning they came up with an idea – they discussed it for hours and put it together like a puzzle, piece by piece, to be able to develop a project proposal.  ‘At this stage, the hardest thing was to find a consensus when we had different opinions.    We understood very quickly that different opinions should not tear us apart but help us find the best solution’. 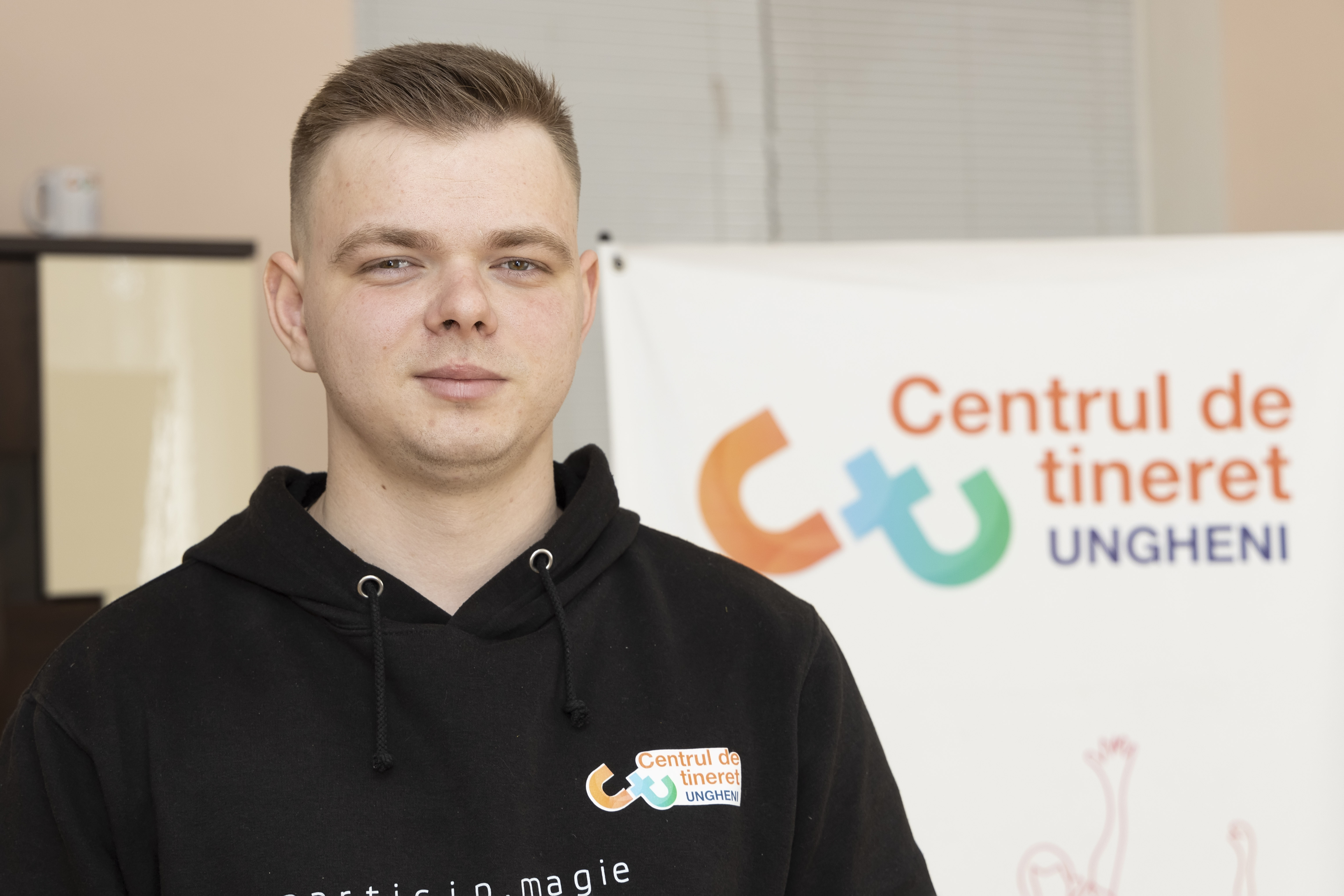 Dan Rosca, a youth worker at Ungheni Youth Centre, says that since the first edition of the YouCreate competition, young people have benefited from both financial support and training that helped them develop their projects later on. ‘Young people learned several important aspects at these training, for example, how to work in teams and distribute roles, how to identify projects that are really needed for the school and community, how to establish partnerships and identify potential co-funding’, Dan says.

The trainings and involvement paid off, and in the end, Mihail and his team were happy to find themselves among the winners.    Thanks to a grant of MDL 25,800 they purchased building materials – plank, paint, supplies, etc.  They paved the area for the future open-air study room and purchased artificial turf using the high school’s financial contribution.

Their parents have supported them since the first day a small construction and innovation site was opened.  Shortly after, several men and women from the neighbourhood and young people from the high school joined them.

‘It was amazing to see how our idea managed to mobilise so many people, including the school administration, parents and people living in the surrounding blocks.  Each of them helped in one way or another and we achieved a great result at the end’, the young man says.

To be able to mobilise so many people, they did what had to be done, or rather, what they learned in the project courses.  They developed a promotional video that was widely distributed on social media and according to Mihail, it helped young people to receive the full support of their peers and adults in the community.  Later, they talked to several residents and developed informative leaflets to explain why it is important for young people to have a venue where they can spend their free time.

Mihai Golovaciuc and Oxana Timosco, teacher in Ungheni - the adult member of the initiative

Oxana Timoșco, Deputy Director of Education at ‘Gheorghe Asachi’ High School and the youth group adult coordinator is proud of their initiative.  ‘As a teacher, I know that it is difficult to mobilise young people.  Therefore, such initiatives are particularly valuable.  I am proud of their creative and innovative ideas, of their courage and perseverance’, the teacher says.

The work was finished in several weeks, and now, the venue is one of the most popular places for high school students during school breaks and for young people in the town who organise various performances here or meet to discuss project ideas and initiatives.

Since the whole neighbourhood has worked to build the venue, no one dared to vandalise it so far.  ‘That was one of our fears – flowers or benches might disappear or be broken or thrown away, but people who got involved take care of these things, so nothing is damaged.  The venue is illuminated at night and a high school employee provides security’, Mihail says. 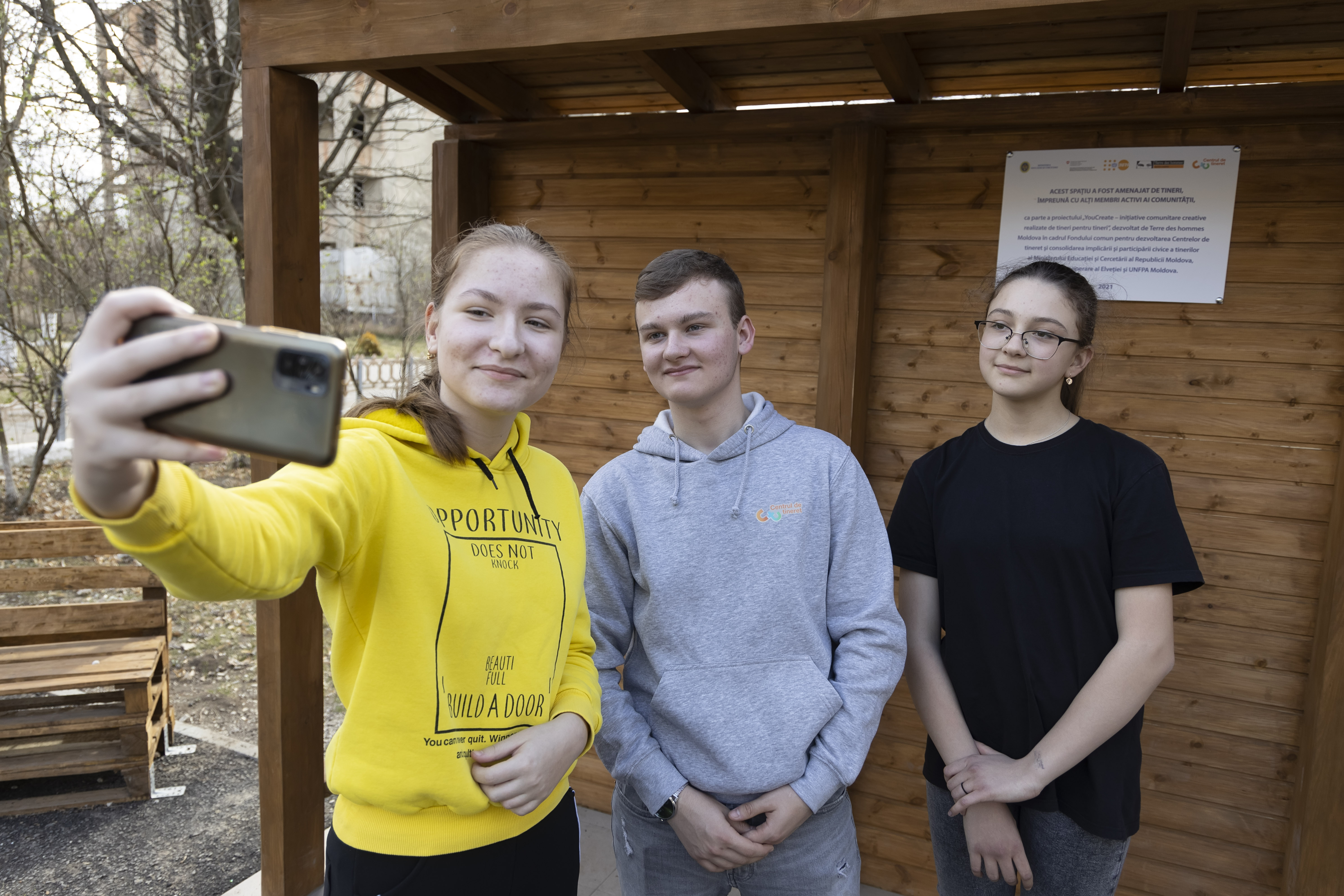 Mihai and his teammates, at the local outdoor youth-friendly space

Since it has been a successful initiative, this year, Mihail and his team decided to expand the project and provide the venue with board and intellectual games to be played outdoor.  Not only the project has expanded, but also the implementation team.  Besides a group of colleagues from ‘Gheorghe Asachi’ High School, Mihail managed to involve some young people from ‘Mihai Eminescu’ High School in Ungheni.

‘We tried to make this symbiosis between institutions to promote youth cooperation and identify the best ideas and solutions.  I urge all young people to get involved, believe in their own strengths, build teams that solve actual problems or launch projects that make people’s lives better’, Mihail says.

The Youth Centers Network in Moldova provides support for the development of creative community initiatives conducted by young people for young people.

#YouCreate is carried out in partnership with Terre des hommes - Moldova and supported financially by the Joint Fund for Developing #YouthCentres and Strengthened Participation and Civic Engagement of Young People set up by the Ministry of Education, Culture and Research of the Republic of Moldova, Swiss Cooperation in Moldova and UNFPA Moldova.