The secret of a successful career is to be found in Syslab Center, Comrat

One out of ten young people in the Republic of Moldova is unemployed. 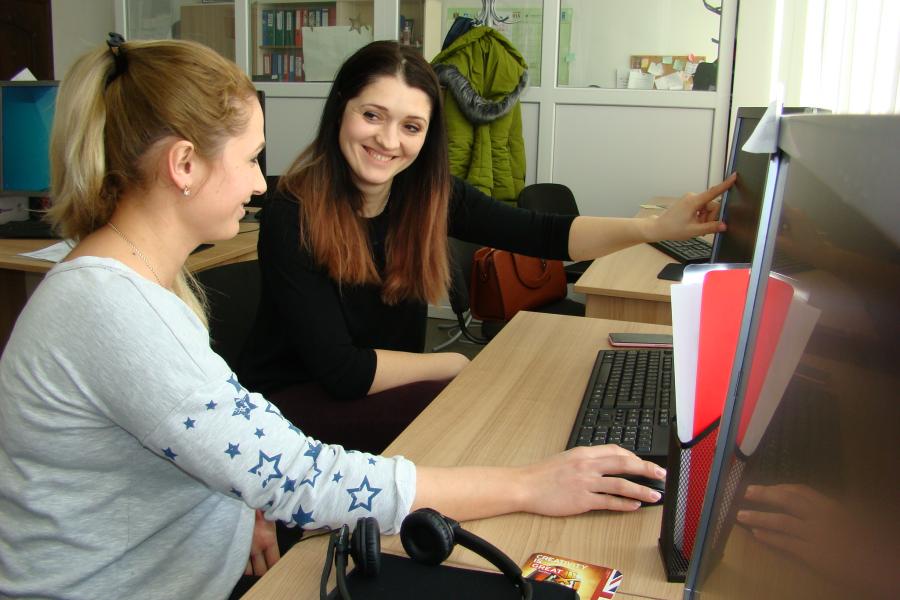 The secret of a successful career is to be found in Syslab Center, Comrat
Photo | UNDP

“This is what official statistics show. In reality, I think their number is much higher. Even the young people who have found a job feel unemployed in a way, as they have to work for a ridiculously low salary and precarious conditions. I got opposed to this perspective and with the assistance of Syslab Center in Comrat, financed by the European Union, I succeeded to find a decent job at home”, says Olga Dudoglo, a 25-years-old young lady from Comrat.

In summer 2016, Olga was looking for a source of livelihood. With a master degree in civil law and nine months of experience within a law company in Comrat, she thought she would easily find a job in her native town. But a number of months have followed of useless search. “I was ready to pack my things and leave for work abroad, as half of my faculty colleagues did. I just could not leave my father and grandfather alone, especially taking into account that they needed me. I was lucky to hear at that time on the radio that Syslab Center in Comrat, financed by the European Union, provides free-of-charge assistance for obtaining a job”, tells us Olga Dudoglo.

She came to the Center with big hopes and changes occurred soon. “In those four weeks of training, I have rediscovered myself: I acquired more confidence in my own forces, I have developed my communication skills and team work abilities. The practical lessons were of great use to me, giving me the possibility to exercise the presentation techniques during the interviews with employers. Thus, by the end of the training course, I knew exactly what I want and what I have to do to get the job I wished. I was ready to conquer the Everest”, says Olga smiling. And we believe her, because in November 2016, with the assistance of Syslab Center, she was employed within a notary office in Comrat. “I have a decent salary, good working conditions and professional perspectives. But most important, I like what I do, I have found the niche for self-achievement. And this is a big success, taking into account the fact that women, especially the young graduates, have more difficulties in finding a job than men”, continues Olga Dudoglo. Her observations are supported by the data of the National Bureau of Statistics, which show that pronounced gender differences exist on the labor market. The employment rate is lower among women, even though they have a higher training level than men. Moreover, women are worse remunerated than men.

Olga Dudoglo says that besides the chances to find a job, Syslab Center has provided her the possibility to get socialized and to grow professionally. “Nine of the ten group colleagues were successfully employed. All of us a part of the Syslab Alumni Network, a community of friends, where we exchange employment information and announcements, and we help each other”, tells us Olga Dudoglo.

The Career Development Center Syslab was launched in Comrat in April 2015 to train and help free of charge unemployed people, skilled graduates and returned migrants to get a job or to launch and promote a business. Starting in 2016, the Syslab Center in Comrat is financed by the European Union within the “Support for Agriculture and Rural Development in ATU Gagauzia and Taraclia” Programme (SARD), implemented by the UNDP. Over the last year, as part of the SARD Programme, the Syslab Center provided training and individual consultancy to 64 persons, of whom 59 were successfully employed. At the same time, 22 persons were trained in the entrepreneurship area and 3 young persons launched their own business.

The Syslab Center means for Alexandru Pusca from Comrat a chance to start a business at home. After benefiting from training and individual consultancy, he won a grant for 3 thousand USD, which allowed him opening a workshop for artistic wood processing. By the end of 2016, Alexandru has assembled himself a wooden turning machine and found the necessary design software. He has used imagination to create icons, toys, and décor items from wood. He has already a list of clients, and the most wanted items are the wooden icons made like by the hand of a gem. Only several months have passed since when he has launched his business, but he succeeded already to create 5 new jobs. “I always wanted a business which would provide me financial independency. Without the assistance of the European Union and Syslab Center, I would not have had the possibility to open the workshop”, says Alexandru Pusca. He considers that every business implies a lot of work and intellectual investments, but the reward is according to the undertaken effort.