Ecaterina Chiciuc is 60 years old. She has lived in this village, Slobozia Mare, since she got married at 20. 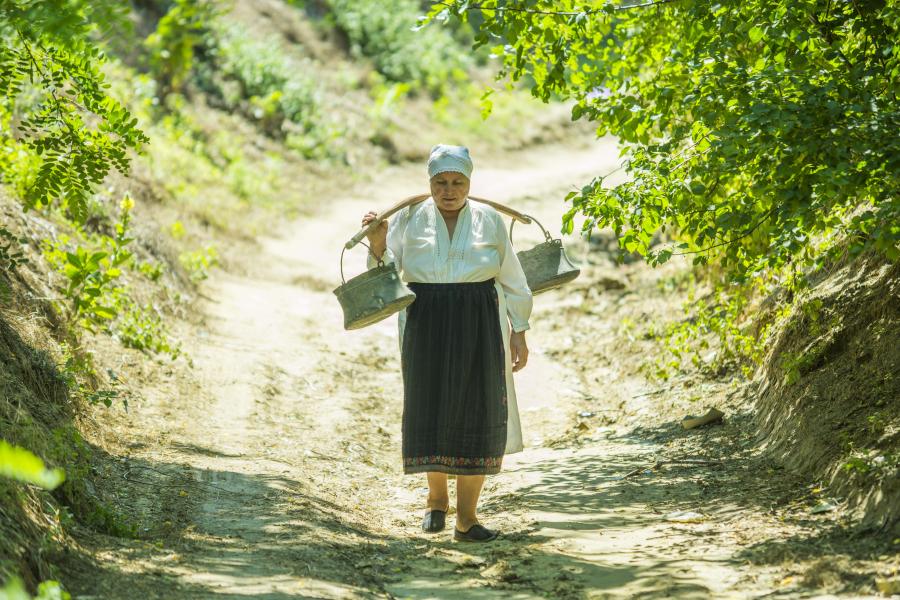 Since that time, she has been carrying water to her house from a well in her neighborhood.

Her daughter and grandchildren have shared the same burden for the entirety of their lives. In most rural communities, it is the women who are responsible for the water supply in the household.

Slobozia Mare is located in southern Moldova, more than 200 km away from the capital city of Chisinau. Many of its inhabitants make a living breeding poultry and cultivating vegetables. The long distance from any water source has always been a major issue.

Eight out of ten villagers have access to a tap system, but the quality of the water is worrisome. The old pipes make water rusty and muddy, and the water is highly concentrated in metals — way above the legal norm.

So the villagers have devised a temporary fix. They collect rain water in big receptacles and store them away. But it’s by no means an adequate solution.

Like most villages in Moldova, Slobozia Mare has lost more than ten percent of its inhabitants to migration. In many cases, villagers have found better job opportunities abroad, and their remittance payments make significant contributions to the economy at home.

Now a UNDP initiative, financed by the Swiss Agency for Development and Cooperation, is exploring whether bringing residents and migrants abroad together can amplify local voices and create practical solutions to calcified problems.

In Slobozia Mare, residents and migrants abroad gradually joined forces to form a Home Town Association, now an officially registered NGO. And one of the first things the NGO did was commit to solving the problem of water, which they unanimously agreed needed urgent attention.

But a key component was still missing: the money. That’s how the community’s first crowdfunding campaign was born. Soon, the municipality and the local NGO were reaching out to villagers and migrants alike, asking for donations.

The uptake was quick. In just three months, more than 100 residents collected nearly 5,000 euros. The amount was topped with 2,000 euro from the local administration and 20,000 euro from Swiss Agency for Development and Cooperation.

Within a month, a company selected via public tender completed the works, digging and changing the damaged pipes across the village.

Some of the village residents even volunteered to help the workers and took to digging the ducts.

In the case of Slobozia Mare, the crowdfunding was an experiment that paid off multiple times over.

For Aculina Girnet, 82 years old, this is the first time she has clean water running at her house.

“When I saw tap water in my household, I cried. I have built this house and raised three children. You can image how much water I have carried for food, washing and other necessities over the years,” she says.

Ecaterina’s granddaughter, Violeta Tulum, echoes that sentiment. “I can’t imagine how tough life was for my grandmother and mother.”

It looks like in Violeta’s life, that image of women carrying water in buckets across long distances may finally become a distant memory.

Over 200,000 people from 23 villages in Moldova have benefited from the Migration and Local Development project, implemented by UNDP in Moldova with funding from the Swiss Agency for Development and Cooperation. The project aims to improve local infrastructure and living conditions. It brings together residents and migrants of villages to prioritize the main issues facing their communities, and helps connect them to municipalities and international donors to help them solve the issues.

Out of this amount, approximately $118,000 represent crowdfunding efforts by Moldovan migrants living abroad.

Another $214,000 were provided by local authorities and $460,000 by the Swiss Agency for Development and Cooperation.