Story of green energy in Moldova must go on!

270 children from ‘Povestea’ kindergarten in Nisporeni are living a fairy-tale. 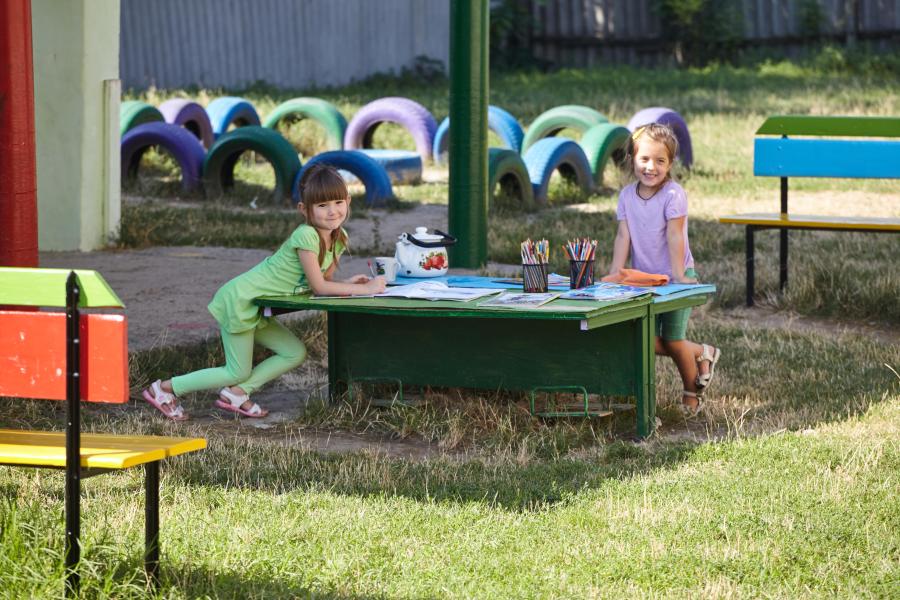 They have access to an abundant amount of hot water heated by solar collectors. During winter time, they will also enjoy warm rooms heated with biomass energy. This switch to green technologies was possible with funding from the European Union offered as part of the Energy and Biomass Project.

‘I use more hot water at the kindergarten than at home. The sun is very generous as it has many rays which warm the solar panels installed on the rooftop of our kindergarten. Hence, we have plenty of hot water which we enjoy. I already told my mom and dad to install solar panels at our house’, says Gabriel, a boy from ‘Povestea’ kindergarten.

‘Povestea’ kindergarten is the first public institution in Nisporeni to switch to renewable energy. A team of educators, parents, and representatives of the local authority organised public debates in order to take a common and responsible decision in favour of clean energy.

‘It was very important that this decision is taken jointly as this is something which affects each of us. It is never too easy to take the first step. We did it and now we see the benefits. We are happy that the kindergarten has access to clean energy, which is produced locally. We will have assured the security of energy supply and will keep funds in our country. It is incredible that we can have hot water heated by the sun without any additional cost for its usage. Our children are using hot water all day to wash their hands and they even take showers before their afternoon nap, which is something we could not afford before when the water was heated with electric boilers’, says the director of the kindergarten, Tatiana Cociu.

Due to the high cost of hot water and a modest budget, the kindergarten administration was forced to reduce the usage of hot water. Hot water was only used in winter-autumn time and even then, in limited quantities. ‘Our hands were freezing when we were washing dishes during winter time. Water was heated only a little bit. Now it is such a pleasure to work at the sink’, says Vera Bulaş, one of the cooks.

Solar collectors are connected to a heating system operational on biomass, which replaces natural gas boilers. The system has a capacity of 4 thousand litres per day and automatically regulates water temperature to avoid the overheating on torrid days or development of bacteria when the water temperature in reservoirs drops. During winter, the kindergarten will have three alternative sources of domestic water heating: solar collectors, biomass heating system and traditional electric source.

The investment made by the Energy and Biomass Project, funded by the EU and implemented by the UNDP, is not the only one at the ‘Povestea’ kindergarten. Local public authorities made a series of works meant to improve the energy efficiency of the building with 2,500 square meters. Thus, with the support of other donors, PVC windows were installed, the roof and walls were thermally insulated and the entire heating system of the building was modernised. The plans of the local administration do not stop here. ‘We want to purchase a chopper and a production line for a specialised municipal enterprise to produce biofuel from local agricultural and forest residues. Currently, the enterprise has transportation, a storage facility and qualified staff, hence with the acquired equipment will be possible to extend its activity. At the same time, we will supply the kindergarten with biofuel of good quality and at affordable price’, says the mayor of Nisporeni, Grigore Robu.

The Energy and Biomass Project granted 85,000 EUR, European funds for the installation of the biomass & solar heating systems in Nisporeni. The community invested 15,000 Euros from the local funds, as well as from the parents' contribution.

"We can’t expose children's health and that is why we have gladly supported the kindergarten’s greening initiative. This brings more benefits: constant temperature in all rooms, hot water and comfort for children. We are proud of our role, even small, in reducing environmental pollution, as well as in local economic development, as the money spent on energy remains in the country", noted Cristina Moldovanu, parent.

21 kindergartens and health centres throughout the country have solar collectors installed thanks to the EU support. The solar systems are combined with biomass heating plants which ensure thermal comfort for children and educators, budget savings and local development. By the end of this year, solar panels for hot water production will be installed in 37 other kindergartens in the framework of the Moldova Energy and Biomass Project.