Buckwheat and almonds are the new raw materials for Moldovan briquettes

For the time being, renewable energy is the only opportunity for the Republic of Moldova to diversify its sources of energy supply and improve energy security. 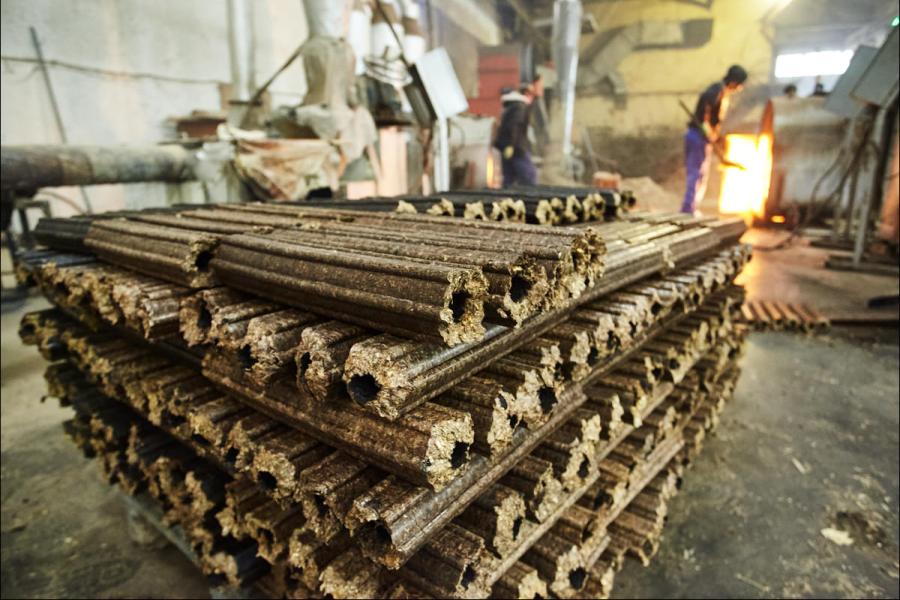 For the time being, renewable energy is the only opportunity for the Republic of Moldova to diversify its sources of energy supply and to improve its energy security. Out of all the renewable energy sources, biomass has a high potential in the country.

The young entrepreneur, Dmitri Asoscov, who earns money by turning waste into energy, also shares these beliefs. Being inspired by the success of other producers and the desire to work home, beside his family, Dmitri and his partner Serghei Alexei set up a business 3 years ago. After its launch, their business provides them financial benefit and a moral satisfaction with the contribution to the reduction of fossil energy consumption and country's energy security.

"I wanted to work home and bring added value to the potential of our country. I learned to earn money from waste, turning it into green energy. In addition, there is nothing more important to me than to always be with my family, to enjoy my four-year-old daughter, especially because I will soon become a daddy for the second time”, says Dmitri.

Dmitri and Serghei started their business from a small carpenter's shop, and because they had to do something with wood sawdust, the business was expanded into a similar area - production of briquettes. The biofuel from wood sawdust is the most demanded by consumers because it has a high calorific value and little ash. Also, since the demand was high, the two partners sought for new sources of raw materials to produce more and chose buckwheat husks and almond nutshells.

"The quality of briquettes produced from almond nutshells and buckwheat husks is very good. The only recommendation for the manufacturer is to add a certain amount of wood sawdust. The lignin contained in it will contribute to a better pressing and durability of the briquettes”, says Grigore Marian, director of the Solid Biofuel Laboratory at the Agricultural University. Each new batch of briquettes has been tested at the Laboratory in order to be sure the experiment is performing well, says Dmitri Asoscov.

So far, the company has produced and sold 150 tons of buckwheat briquettes and 150 tons of almond nutshells briquettes. In addition to these two types of briquettes, the company produces briquettes made of sunflower seed shells, walnuts shell and wood sawdust, as well as wood charcoal produced by pyrolysis. Hence the idea of a new business line - the production of electricity based on the gases released during the pyrolysis process has occurred. “We will be the first clients of this new business line. We will use the energy to feed the hall and the entire production process, but also for the needs of the office building”, says the entrepreneur.

The company has two briquettes production lines operating in parallel with a production potential of 80 tons per month. Both lines produce high-quality Pini Kay briquettes, even if the method is more complex and requires more effort from the staff and a longer production time.

The company offers jobs for 25 employees, including 15 employees working in the production area. "At first, when I was hired I did not realize what was really the value of the work I do. But after I warmed my house a whole winter with briquettes, I saw the money savings and I understood that we could be more efficient if we learn how to use our own resources”, believes Anton Stici, an employee of the company.

Because the demand for biofuel is still high, the two partners are thinking about new sources of raw material. "Now, we are looking for agricultural land for energy plants, especially energy willow, which generates a large amount of wood. It will provide us with our own raw material, thus cutting off the cost of producing biofuel”, concluded Dmitri.

The EU-funded Energy and Biomass Project, and implemented by UNDP, has supported the development of the biofuel market practically from the scratch, stimulating both the demand and supply of briquettes and pellets. In this way, during 7 years, biomass boilers have been installed in over 200 schools, kindergartens and social institutions, and more than a thousand families have received subsidies for the installation of biomass boilers. At the same time, businessmen were able to buy in leasing, with 0% interest rate, baling and shredding equipment, briquetting lines and other equipment. The private sector was also supported by the establishment of a sectoral association, the adoption of standards and the endowment and accreditation of the Solid Biofuels Laboratory with the help of the EU project.