The United Nations Common Country Analysis for The Republic of Moldova (UN CCA) provides an in-depth analysis of the country’s socio - economic development and political context, along with critical challenges and root causes. It is intended to serve as the basis for the future cooperation framework and the United Nations Country Team (UNCT) joint annual work programmes. 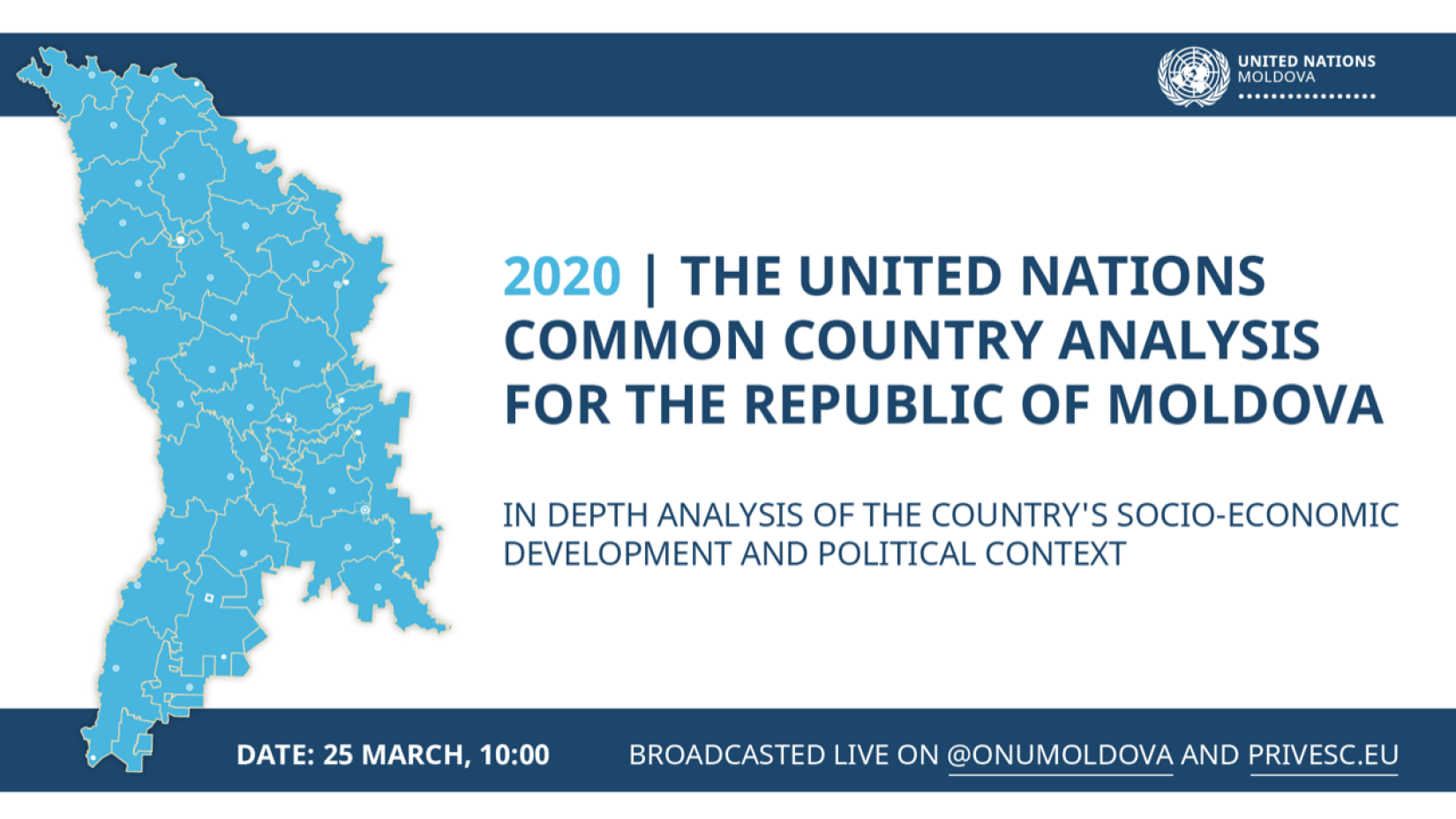 Moldova is one of the poorest countries in Eastern Europe and is in the ​top countries with ​the fastest shrinking population in the ​world losing​ 1.8% of its population ​annually​. Based on three scenarios projections, even the medium scenario predicts a decrease of the population to less than 2.4 million by 2035. Although inequality has decreased in the last few years, social transfers still make up a significant share of household incomes. The large outflow of Moldovan migrants has led to substantial dependency of Moldova’s economy on remittances, being in the top 10 most remittance-dependent countries in the world. Income of the poorest households increased by 38% in pre-Covid-19 period, coming primarily from remittances and social assistance. At the same time, the share of the poor is three times higher in rural areas (31.6%) compared to urban areas (10.6%), including among children (34.7% vs. 9.4%)​.

“As development partners in Moldova, the creation of a common understanding around challenges and opportunities Moldova is facing is an important process to understand how to be more efficient and effective when aligning our activities to the national needs and strategies – including shared agreements about priorities. The UN Common Country Analysis for Moldova serves as a basis for priority setting within the UN that feeds into resource mobilization, development of cooperation partnerships, as well as projects' technical design contributing to sustainable development of the country. “ stated Simon Springett, UN Resident Coordinator in Moldova in his opening remarks.

“The United Nations stands as a key development partner for the Republic of Moldova and the Government highly appreciates the role and contribution of UN Country Team in advancing the development agenda of the country. The Common Country Analysis Report will help Moldova's authorities to prioritise strategic decisions and embark upon more evidence-based policy making.” mentioned Gheorghe Leuca, State Secretary of the Ministry of Foreign Affairs and European Integration of the Republic of Moldova.

Disadvantaged and vulnerable people, who are often left behind, are not sufficiently captured by official data, and they are invisible in regard to the development of policies and programmes.  Inequalities in terms of gender, ethnic groups affiliation, and residence persist in education. Children in rural areas perform worse than those in urban settings. Only 11% of children with disabilities have access to ECD, similarly the Roma children. At the same time gender equality is weakly mainstreamed in the strategic planning, policy development and budgeting processes. The gender wage gap is 14%, while in some sectors, such as finance, it reaches 38%​. About 40% of women were victims of domestic physical violence at least once in their lives on average​.

“There is no single factor of vulnerability regardless of its nature, but rather an accumulation of these factors that leads to complex challenges that need complex solutions and interventions otherwise they intend to become chronic. Many times, vulnerabilities tend to be intergenerational, are historic and build for years and decades. I would like to call everyone to think realistic of what can be done in limited time, with reduced human resources, financial resources and limited expertise” added Liliana Rotaru, president of CCF Moldova.

Employment rates are the lowest in the region and labour market is characterized by substantial gender and age-based discrimination. Employment of persons with disabilities is half that of the general population, ​while 36% of persons living with HIV are unemployed. ​

Social cohesion remains fragile with negative attitudes towards vulnerable groups​. The data show that 85% of people would prefer LGBT people to leave their community​ while 50% would prefer not to live next to people with HIV and AIDS and Muslims.

“We pay a particular attention to the importance of improving the lives of the people of the Republic of Moldova. Within the context of the EU assistance offered to Moldova people are at the very core of our considerations. They are the beneficiaries of our support. The EU and its Member States are the biggest donor in Moldova, offering in the last years over one billion Euro. As of March last year, a substantial part of EU support was reoriented towards the mitigation of the consequences of the COVID-19 pandemic and socio-economic recovery applying the Team Europe approach. “stated  H.E. Peter Michalko the EU Ambassador to Moldova.

Climate change is having a significant impact on agriculture in Moldova, affecting people’s livelihoods. While the cost of climate adaptation measures is relatively high, the cost of inaction is double.​ It is estimated that by 2030 Moldova will register a decline with 6.8% in average annual rainfall - summer (19.3%) and autumn (16%)​.

The idle and protracting Transnistrian conflict resolution continues to prevent the region and its people from creating a critical mass for development, but also for catching up with the progress made by their Moldovan peers as regards the attempt to upgrade the country’s socioeconomic situation and outlook to parity with European Union (EU) standards.

Moldova has ratified seven out of the nine core United Nations human rights treaties. The two conventions that remain unratified are the Convention for the Protection of all Persons from Enforced Disappearance and the International Convention on the Protection of the Rights of All Migrant Workers and Members of their Families.

The implementation of the Sustainable Development Goals (SDGs) 2030 Agenda has seen substantial progress on poverty reduction, decent work and economic growth, climate action and partnerships for development (SDGs 1, 8, 13 and 17). The progress towards improving nutrition, health and well-being, gender equality, sustainable energy, industry, innovation, infrastructure and sustainable cities (SDGs 2, 3, 5, 7, 9 and 11) has been more modest.  Less noticeable progress was noticed towards enhancement of the quality of education, and of water and sanitation.

Unfortunately, the COVID-19 pandemic has affected all socioeconomic sectors of the country, stagnating its development, and slowing down its reform agenda, putting an enormous pressure on health sector, education and private sector.

The UN CCA has been conducted jointly by 23 United Nations agencies, funds, and programmes with the leadership and coordination of the Resident Coordinator’s Office in Moldova United Nations organizations working in the Republic of Moldova based around the principle of leaving no one behind. Desk research was complemented by a consultative process with civil society organizations, which provided insights into the key challenges faced by disadvantaged and vulnerable groups. In addition, the analysis integrates data from more than 25 COVID-19 impact assessments conducted by the UNCT in 2020.