A bridge connecting "two banks of the Nistru River", fully renovated with the EU support 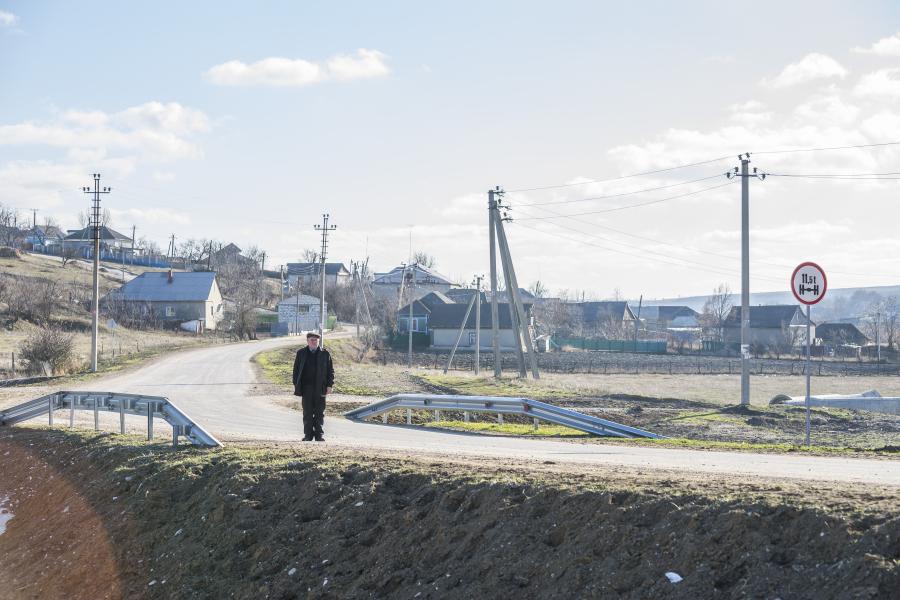 A modern bridge renovated with European funds put an end to the long-standing problems challenging the communities of Hirbovat, Anenii Noi district, and Proteagailovca, a suburb of Bender. The bridge linking the two localities risked to collapse any minute, and people were putting their lives at risk every time they passed it.

The bridge has been never renovated for the last forty years. The biggest challenges were brought by autumn rains, and 5,000 people of Hirbovat had to wade through the mud. Waters would flood the road after every heavy shower, while the huge gullies would sink in the earth to form an immense hole. Children were those who suffered most – it was their road to school they had to walk every day.

Although very old and damaged as it was, the bridge still served a direct linkage with Proteagailovca village and Bender town and the only access road for the heavy cargo trucks that transported to Chisinau products of the local poultry farm, where hundreds of people from both banks are employed.

Vladimir Calmac lives next to the bridge and says that – before the renovation – each rain was a real problem for all dwellers of this area. “Just in front of my gate there was a huge hole in asphalt. When big trucks drove past, plaster peeled off from my house’s walls. As soon as showers started, people would never take their rubber boots off. Every morning I would find several pairs of boots of other people at my gate, full of mud. On mornings, when villagers were going to the town, they would leave them in my yard, and on evenings they would take them back to reach their homes”, says the man.

Maria Calmac, another dweller of the village, says that after the bridge was renovated, she could visit her family more often, who live on the other part of the village. “Cars were all covered in mud up to the windows, as the gates and the fences were. It was very difficult to visit my family, especially after rainfalls. Now, with this new bridge, it is much easier”, says woman.

It was also challenging for the dwellers from Protigailovca or Bender to come to Hirbovat market on Saturdays and Sundays or to visit their family members there.

“We risked stopping the traffic any day, and thus the connection between the villages of Hirbovat and Proteagailovca would disappear. Many local villagers have family and friends over there. If we blocked the traffic across the bridge, the people from Proteagailovca who work in our village would waste much more time and money to reach the work by some roundabout ways”, says Ion Ghetan, mayor of Hirbovat.

The problem worsening day by day, the local Mayor’s Office found some resources to invest in elaboration of a technical design for renovation of the bridge back in 2011; later it contacted several national and international funds to implement the project.

The solution came with the “Support to Confidence Building Measures” Programme funded by the European Union and implemented by the UNDP. Thanks to the EU funding of over 2.9 million MDL, the bridge was renovated right from its foundation, including 500 meters of the adjacent road.

Reconstruction activities started in 2016 and lasted several months. Now the population of Hirbovat does not need to fight with the mud, there is no permanent risk of traffic accidents, and people from both villages now enjoy another connection line.

“After the renovation, we have already managed to organize a few joint activities with our colleagues from the left bank. Thus, teachers from the neighbouring locality visited us to exchange experience”, says Ion Ghetan.

Confidence building measures for the two villages are set in a long-term action plan. One of such measures will be implemented in the next months, when Hirbovat and Proteagailovca communities will join efforts to plant trees in the area next to the bridge.

Hirbovat bridge is one of over 80 infrastructural renovation projects implemented through Support to Confidence Building Measures Programme funded by the European Union and implemented by the UNDP Moldova. The Progamme contributes toward consolidation of confidence between populations of both banks of the Nistru River by involving local leaders, business community and civil society in joint development projects aimed to promote businesses and improve social infrastructure.