A charger for mobile telephones can also be an element of decoration, if produced in the workshop owned by Ivan Hodacovschi. 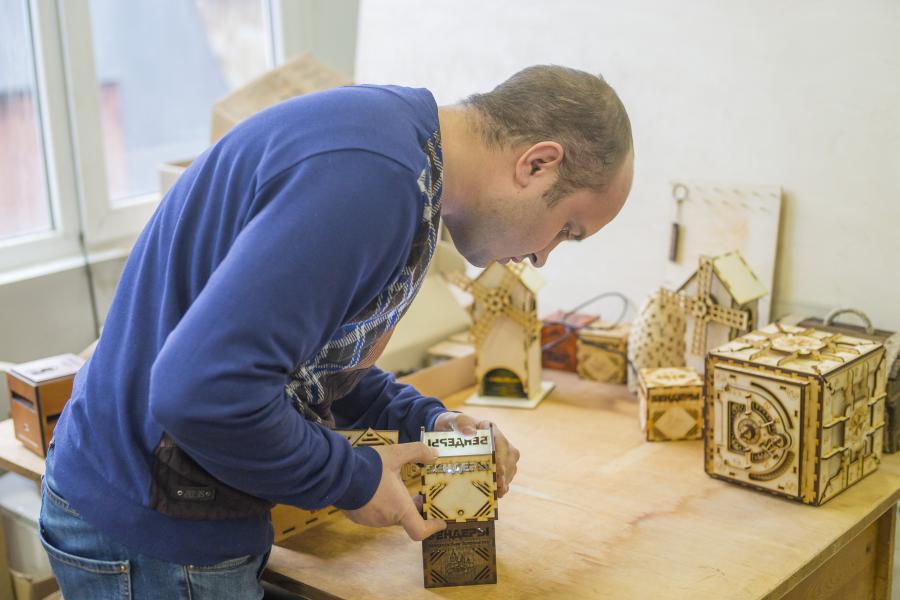 A charger for mobile telephones can also be an element of decoration, if produced in the workshop owned by Ivan Hodacovschi, a young man from Tiraspol, who could start up his business owing to an European Union (EU) grant. Each charger has its own design, carved in wood and coming in various shapes and each one is ingenious. The business was started thanks to an EU grant in the framework of the “Support to confidence building measures” Programme, implemented by the UNDP.

Ivan Hodacovschi has been fond of exact sciences since he was a boy. As a teenager, he attended classes of electronics at an enterprise in Tiraspol, and after school he chose Physics and Mathematics Faculty. His first job (with a mobile telephony company) inspired him with his first business idea. “We had to charge many telephones simultaneously, to meet the high demand. It struck me then that the same problem challenges public places, such as cafes and restaurants, where many people want to charge their telephones”, says the young man.

Shortly after, Ivan implemented his idea, but kept cherishing his dream: he wanted his chargers to have an attractive look. “View of any stylish facility can be spoilt by charger cables hanging here and there”, he says. So, he decided to fit his chargers (he assembles them himself, from some imported elements) in wooden carved boxes, covered by breath-taking ornaments. The charger consists of a few USB connections. Set on a table in a cafe or a restaurant, it will allow the customers to charge their mobile telephones without using the electricity socket.

He assembled his first gadgets manually and invited a few local craftsmen from the left bank of the Nistru River to help him with wood carving. To upscale his business, he needed some modern equipment to process and model wood and other materials, such as plastic. The solution was brought by the grant competition for young businessmen from both banks of the Nistru River, offered by the European Union.

“I did not hesitate to apply, and I am happy to be among the beneficiaries. In fact, I received something more than just money, and something more valuable, i.e. some business management skills. I attended trainings where we were taught management, marketing and interaction with different institutions,” says Ivan.

With the EU grant of EUR 7,480, he could buy two modern tools: a laser engraver and wood-processing machinery. Both are electronic and run on software.

Each detail is thus designed with the help of computer, and then the laser engraves the ornament. After all details are prepared, they can be assembled, just like a puzzle.

Today, Ivan Hodacovschi employs four people, including an artist-designer and an engineer. They sell their products mainly on the left bank, but there are already a few customers in Chisinau. The gadgets are much popular among the owners of catering businesses mainly, but also among those who wish to make a less usual gift to their friends. Gradually, they start receiving orders from abroad too: they have recently shipped their products to Italy. Plans of this young entrepreneur do not stop here, and he dreams to deliver his invention to the big European cities, with their hundreds and even thousands of cafes and restaurants that might wish to use the gadgets.

The cost of products is between USD 28 and USD 77, the price depending on complexity of engraving, size and material of product. The most expensive items are produced from oak wood.

Besides chargers for mobile telephones, the small company produces souvenirs, customized boxes and packages for different enterprises, as well as lamps.

He is convinced that he owes his recent achievements to a mentor he used to have in his childhood, and so Ivan plans to offer a chance to other young people to master his craft. The young man plans to organize some training courses for the teenagers fond of technics and electronics.

Ivan Hodacovschi is one of over 70 young people from both banks of the Nistru River who were awarded European grants in the amount of up to EUR 13,500 to start up or develop their businesses. Moreover, they also benefited of personal consultants’ services for 14 months, who helped them manage their businesses in the most efficient way.