Welcome to the kindergarten where dreams come true

Deniz explains in Bulgarian how a roof should look like, Vlada contradicts him in Russian, and Roman supplements him in Romania 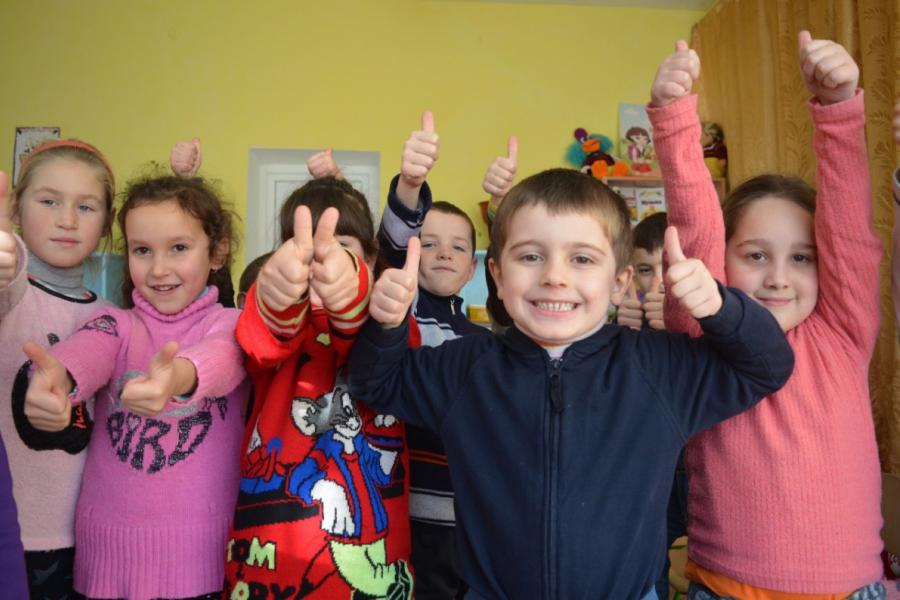 The kindergarten teacher tells them something in Romanian and all of them accept rapidly to build a tower. Only yesterday, 35 children from Balabanu village, Taraclia district, regardless of their age and the language they talk, were huddling together in one small room, while the rule stipulates a maximum of 20 in a group. Now, with the EU support, the kindergarten has been fully rehabilitated and children have better education conditions.

“It was very difficult: for children, for us, and for the parents. We had just one room heated with a rudimentary boiler, which used more wood than really produced heat. Instead of a toilet we had iron pots from the Soviet times. The water pipe broke a year ago, and the windows were ready to fall”, tells us Vera Malina, the kindergarten director.

“Even if Balabanu is a small village, of about one thousand inhabitants, it does not mean that our children are not entitled to quality education and better future. We should not cut their wings only because they are poor. Thus, we have decided with the whole village that the reconstruction of the kindergarten is a priority that we have to invest in,” says the mayor of Balabanu village, Nicolae Munteanu.

Balabanu village, like the other 39 localities from the ATU Gagauzia and Taraclia district, was firstly assisted to draft the village development strategy and a specific action plan tackling the needs of all inhabitants. Since 2016, these localities benefited of European Union’s assistance under the EU funded Programme “Support for agriculture and rural development in ATU Gagauzia and Taraclia district”, implemented by UNDP.

Afterwards, based on the village proposal, EU also financed a project for rehabilitation of social infrastructure. Hence, the “Soare” kindergarten from Balabanu became over a period of four months a completely functional preschool institution.

“It is now three times hotter in the premises and we spend 30% less for heating. And hot water is provided free of charge by the sun. The children do not come to the kindergarten dressed in three layers of clothes anymore. If they are warmer, they have more chances to grow up healthier”, tells us the director. The mayor from Balabanu states that the kindergarten would not have been renovated without the European assistance. “This project was a spark that lighted enthusiasm in all of us”, he says.

One more waited-for class for children was opened when the kindergarten was repaired and 4 permanent jobs and 2 seasonal jobs were created. Even if the children talk among themselves different languages, as the village is a multinational one, the education process became much more efficient for all those 47 children attending now the kindergarten, who were distributed in classes by age.

“We have the possibility to open more clubs of interest, musical or sports ones, and provide more attention to all of them”, tells us one of the educators. “If before I was crying in the morning, as I did not want to come to the kindergarten, now I don’t want to go home. It is more interesting here: we play, study and the food is very tasty”, tells us Valeria, a girl from the senior class.

The inhabitants from Balabanu village, Taraclia district, have waited for more than 30 years for the village kindergarten to become children-friendly. “It was worth it,” the parents say, who are just as happy as their children. “For many of us, it is a chance to find a job and not to worry about our children’s health and safety during the day”, tells us Jana Pavel, one of the parents.

“Our small pupils became teachers for us. It is difficult for me to communicate in Romanian, as I did not study it at school, and now my child teaches me everything he learns at the kindergarten. And I progress”, says Nicolae Dornea, another parent.

The children and parents from Taraclia town, which is located at 10 km distance from Balabanu village, have a similar opportunity to cheer up. With the assistance provided by EU, kindergarten no. 4 from the town succeeded to change the roof and all the carpentry, and the walls were insulated thermally and externally decorated.

“Now the nap of those 242 children enrolled in this kindergarten is sweeter, and their dreams became more colorful, because they enjoy comfortable, warm, safe, clean and friendly premises”, says Ecaterina Ceban, the acting director of the kindergarten. “We badly needed these full repairing works for things to become normal. And now this building will serve us for many generations ahead”, mentions the director.

And all these because the infrastructure projects, be it renovation of kindergartens, construction of water and sewerage supply networks or roads’ building are qualitatively implemented by construction companies selected on competition basis. All the process of construction is strictly monitored by the SARD Programme experts.

At the beginning of this year, 24 localities from ATU Gagauzia and Taraclia rayon had finished their infrastructural renovation projects with the EU assistance, and other 17 villages from the region had been involved in reconstruction works.

"We are glad to see our village changing with the improvement of infrastructure, but the most important thing is that the European Union, through the SARD Programme, managed to mobilize us, inspire us for new projects, make us believe in our own forces and act together to improve our living conditions at home," says Ilia Chiosea, mayor of Gaidar village, Ceadir-Lunga district.

Rehabilitation of community infrastructure is one of the three main components of the SARD Programme. The EU also contributes through this program to creating new businesses and developing small and medium enterprises in the region, implementing LEADER rural development initiatives, as well as to promoting intermunicipal cooperation.

With the EU-funded budget of 6.5 million Euro and implemented by UNDP, the SARD Programme intends to intensify the collaboration between the central and local authorities, as well as among the regional organizations from ATU Gagauzia and Taraclia rayon, for the purpose of fostering social and economic development of the region and of the Republic of Moldova, in general.