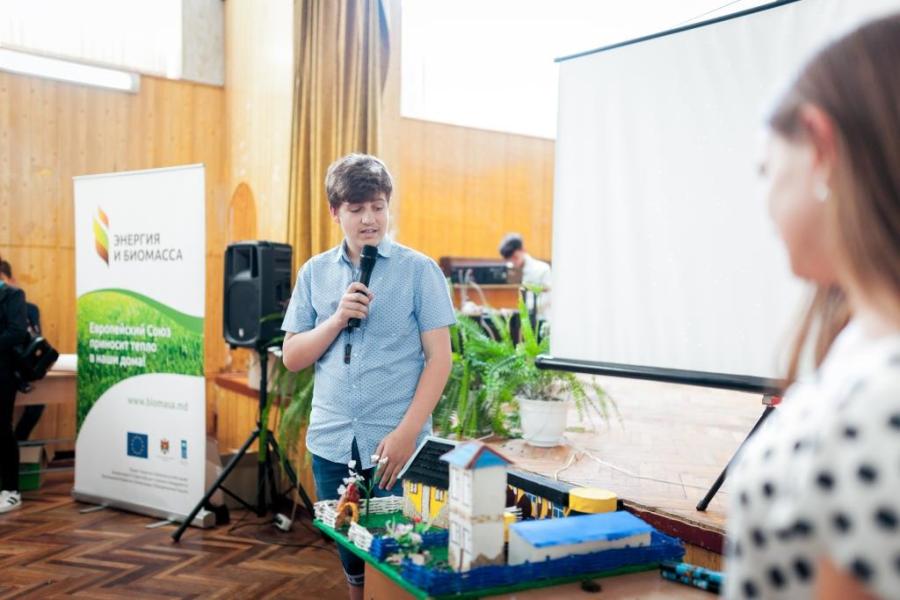 The contest was organized by the Ministry of Education, Culture and Research in partnership with Moldova Energy and Biomass Project, funded by the European Union and implemented by the United Nations Development Programme. The pupils “conspired” with the sun, biomass, water and wind to create inventions based on the power of green energy and which could exempt us of paying our energy bills. Most devices were built from recyclable materials.

Pupils from Costesti high school, Ialoveni district, presented a prototype of a futuristic house – 100% ecological. The house is connected to two wind turbines and several photovoltaic panels. The authors of the project say that people who would live in such a house would forget about the bills and would make some extra money from selling the excess of produced energy.

“The solar panels are rotating as the sunflower, capturing the solar radiation and transforming it into energy. The wind turbines use the wind energy to produce electrical energy”, describes one of the authors of the project, Dumitru Borta, school-pupil in grade VI.

The entire construction is made of materials available in any household – pieces of plastic, wood, metal, and leftovers of building materials.

And even if the energy produced by the toy house is sufficient to charge their mobiles, pupils are confident that their invention will be used at a larger scale in the future. Ion Mereacre, pupil in grade VIII, hopes that the entire village will start gradually to use the renewable energy sources to heat the houses and have electricity. “We hope that the adults will follow our example and implement our ideas in practice”, says the young man.

The interest of Costesti pupils for renewable energy sources was born when a new optional course Renewable Energy Sources was included in the school curriculum, where they can learn how to valorize natural energy resources and how to efficiently use the heat and the light and to protect the environment.

Another participant in the contest - Cristina Bivol, pupil in grade VII, presented 2 turbines to the jury – a wind one and a hydraulic turbine. She built them in her free time using available materials: stands from an old printer, two defective CDs, one plastic box, two magnets and other simple elements. “The wind turbine is on vertical axe which is different from classical turbines but which captures easily the power of wind. My construction powers one small light bulb but I hope it will become an inspiration for those who want to build a larger construction with higher energy capacity”, says the adolescent.

From the beginning of the academic year, Cristina has started renewable energy class together with her older peers. “I was fascinated to be able to produce solar, wind, water energy and I asked the professors to enroll me. The renewable energy is our chance to save the planet and each one has to think what he or she can do about it”, says the girl.

Andrei Lupascu, pupil in grade IX at High school “Constantin Stere” of Soroca, presented the invention developed with other colleagues – a device that captures solar energy and transforms it into electrical energy. To build their invention, the children used an old parabolic antenna, pieces of wood, metal elements from old toys and other things that were given a second life. “The petrol resources will dry out soon. Besides, it is important for people to generate energy without harming the environment”, believes Andrei. He and his colleagues know exactly how to use their invention – in regions where it is difficult to connect to electrical grid, for instance, cabins or constructions in open field, without access to the grid. The model suggested by the pupils of Soroca can generate sufficient energy for a couple of light bulbs but they are confident that, if built at a larger scale, it can be very useful to people who look for cost-efficient and green solutions.

Mariana and Maxim Mereacre, siblings living in Costesti, Ialoveni, proved to the juries that ordinary boxes, beer tins and water may generate heat in a house, if connected to solar energy. The construction looks like a small oven and is designed to capture solar radiation and to heat the air in one room. “These tins are everywhere, and as a rule, end up as garbage. Our idea would be a solution for recycling this waste”, claim the team.

As other pupils who advanced to the national phase of the contest “Renewable Energy Sources”, Mariana and Maxim Mereacre will receive participation tickets to the Summer Camp ENERGEL, 2018 edition, where they can share ideas with other pupils interested in renewable energy resources.

“In total, 57 pupils from 26 schools took part in the final phase of the “Renewable Energy Sources” contest. The finalists were selected following local/district competition. The schools connected to biomass heating systems funded with European funds of the Moldova Biomass and Energy Project were eligible for the contest, as well as pupils of grades 7-9 who study the optional discipline “Renewable Energy Sources”, says Tatiana Craciun, Community Mobilization Specialist, Moldova Energy and Biomass Project.

The winners of national contest were selected by a Jury consisting of representatives of Ministry of Education, Culture and Research, Energy Efficiency Agency, Biomass and Energy Project and social initiative ‘Hai, Moldova”. Among the winners of 2018 National Contest “Renewable Energy Sources” are:

According to Mariana Goras, Deputy Head of General Education Division within the Ministry of Education, Culture and Research, the contest aims to promote best energy projects using renewable energy sources. “We are very pleased that this year edition showed again creativity and special skills in designing and presenting innovative ideas in the field of renewable energy sources”.

The Contest “Renewable Energy Sources” is at its second edition and was organized by the Ministry of Education, Culture and Research in partnership with the Moldova Energy and Biomass Project.