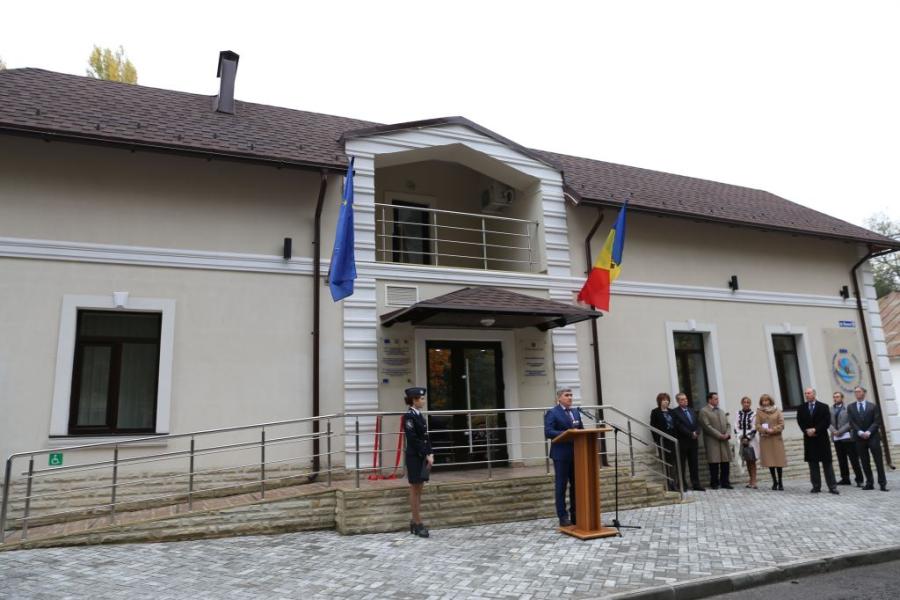 The majority come from Russia or Ukraine, but there are also foreigners coming from developed countries, such as Italy, Switzerland or USA, to live in the Republic of Moldova.

The Bureau of Migration and Asylum (BMA) is one of the first institutions with which the foreign citizens interact. This is a structure subordinated to the Ministry of Internal Affairs, which ensures the legality of foreigners’ stay in the Republic of Moldova. Up to a year ago, those who were going to the BMA’s North Regional Service, located in Balti city, were served in an old building without basic commodities. Built in the ‘40s of the last century, the building has never been under capital renovation – the ceiling was falling down, just like the plastering from the walls. People were quieting for long for their turn to come, and cold was a reality in all the premises during the winter time. Things changed radically when the building was repaired with the support of the European Union, US Embassy in Moldova, the United Nations Development Programme (UNDP) and the International Organization for Migration (IOM).

Now the employees of the Service work in spacious and luminous offices equipped with modern technologies for processing documents and modern furniture, and the visitors are served more rapidly and efficiently. “Before the repair works, the turnover of the personnel was huge. People were leaving not because of the salary, but because of the difficult work conditions,” mentions Boris Gandrabura, Head of the North Regional Service of BMA.

The renovation ended in July 2017. The building became more spacious. A mansard was built and the premises were adjusted to the needs of all the visitors, including those of persons with disabilities.

Estera Statnaia is one of the Service’s beneficiaries – a woman who has moved to Moldova from the United States of America, where she lived for 18 years. Since she got married with a Moldovan citizen, Estera has lived for two years in Lipcani town from Briceni district. She visited several times the North Regional Service of the BMA to obtain, and subsequently to extend, the stay permit. She remarked that conditions got much better since the premises of the institution got repaired and modernized. “We are glad that there are no queues anymore at the foreigners’ documentation window. The entire procedure for submitting and issuing the documents lasts for no longer than 10-20 minutes,” mentioned the woman.

Estera originates from Chernovtsy and knows Romanian language – she learned it in the Orthodox Church, the only one in the town that she lived in the USA. “As the church service was in Romanian, I tried to learn it so as to understand what the priest was saying. In two years I started to communicate, firstly more timidly, and afterwards with more and more confidence. I did not know that the fate is preparing me to come to Moldova,” says the woman with a smile.

As she knows Romanian, Estera could obtain a permanent stay permit in the Republic of Moldova, after taking a language proficiency exam. Subsequently, she will be able to lodge the documents for acquiring the citizenship, conditioned that she takes one more exam – that of knowing the Constitution of the country.

Another woman, Nadejda Gradinari, witnesses what she has dreamed of for years - to get the possibility to live again in Moldova. She left the country when she was 21 years old and she has lived for three decades in Vorkuta – a Russian city located above the Arctic Circle. She originates from Stolniceni village, Edinet district – the locality to which she came back after retiring. She settled in the house she has inherited from her parents, and recently was joined by her husband, who left his native city for Moldova. The two of them are living off their pensions and from what they succeed to grow in their household. “We planted an orchard, we have a vineyard, bought two goats, and are cropping fruits and vegetables. We are doing well. I’ve always hoped to come back home and I am so glad that I succeeded to make this dream come true,” says the woman.

As she left the country before its declaration of independence, Nadejda did not get the Republic of Moldova citizenship, so she had to follow all the procedures for legalizing her stay here. She is pleased with the services provided by the BMA office in Balti. “I have all my documents in order. Now we came to get a stay permit for my husband. They gave us a list of documents that we have to bring,” explains the woman.

Nina Macarova is also one of the Service beneficiaries. She is over 80 years old and moved from the Russian city - Syktyvkar. As she has no one to care for her, she moved in with her daughter, who lives in Camenca, a town from the left side of the Nistru River. “It is the second time when we come to this Service and we are very pleased. It is very important for an elderly person not to stay too long in a queue. Here they serve us very rapidly, and the personnel is very nice,” says the old lady.

Persons with disabilities also enjoy better conditions. Before renovation, the building was practically inaccessible for people in wheelchairs. One of the employees of the Service, Ana Vortolomei, mentioned that two weeks ago, a woman in the wheelchair came to conclude the stay permit for her husband, who is a foreign citizen. “She was very pleased as previously she could not get into the building all by herself. She always had to ask for somebody’s help so as to get up on the stairs. Now she has used the access ramp and she did well,” remembers the employee.

The reasons for which the foreigners end up living in Moldova are very different, but most of them settle down here after getting married with Moldovan citizens, states Ana Lupascu, the Head of the one-stop-shop for foreigners’ documentation under the BMA’s North Regional Service.

In total, over the first four months of the current year, the employees of the one-stop-shop have processed 661 applications lodged by citizens from 51 countries of the world. The majority of applicants originate from Ukraine, Russia, Romania, but also from Italy, CIS states, Turkey. A smaller number of persons come from such countries as Lithuania, Denmark, Austria, Saudi Arabia, Israel, Spain, Sweden, Canada, Switzerland, Tunisia, and Portugal.

“Some people live in the city, but there are a lot of persons opting for living in villages. For instance, an Italian citizen who got married here three years ago, has already learned the Romanian language, has a house in the countryside, grows maize, tomatoes, cucumbers, and takes care of an orchard. He does not want to leave Moldova and he is very happy that he can live in our country,” says Ana Lupascu.

A separate category of the Service beneficiaries would be the foreigners who work legally in the northern districts of the country. The Free Economic Zone from Balti operates in the region and hosts over 50 economic units, the Free Economic Zone from Ocnita “Otaci-Business”, as well as foreign investors. “We really focus on working with business representatives from outside the country and attracting foreign investments. For instance, about 30 foreign citizens are assembling currently a production line in one of the enterprises from Balti. There are many foreigners in leadership positions, top managers, and general directors in the Free Economic Zone. Besides, there is a training center operating here, which hosts Bulgarians, Serbians, and citizens from other states. All these specialists have to get a special permit to be able to be employed legally,” clarifies Boris Gandrabura.

At the same time, this structure also has the role of combating illegal stay and undeclared work. “Annually, about 500 foreigners involved in illegal situations are being identified. Last year, 220 were removed from the country due to this reason. All the other succeeded to legalize their stay, after being fined in compliance with the legislation in force,” states the Head of the North Regional Service of the BMA.

Very soon, a center for foreigners’ integration will start operating under Balti Regional Service. This will be one of the three zonal structures which will operate in Balti, Cahul and Chisinau, according to a Government Decision. The establishment of the respective centers is one of the conditions set in the European Union – Republic of Moldova Association Agreement.

Just like other structures of this type, the center from Balti will facilitate the study of Romanian language, familiarizing foreigners with Moldovan traditions and culture, employing them on the labor market or providing a safe economic activity as a subsistence source.

The renovation of the BMA’s North Regional Service premises was possible thanks to a number of donor institutions. Thus, the European Union has contributed with about 6 million MDL as budgetary support. The US Embassy in the Republic of Moldova has allocated 1.450 million MDL through a project of the International Organization for Migration (IOM). The United Nations Development Programme (UNDP) provided assistance for developing the modern design, manufacturing the furniture and procuring a set of computers for a total value of 900,000 MDL.