Young woman manufactures earrings, bracelets and rings from computer boards and chips, and sells her products in Moldova and abroad. 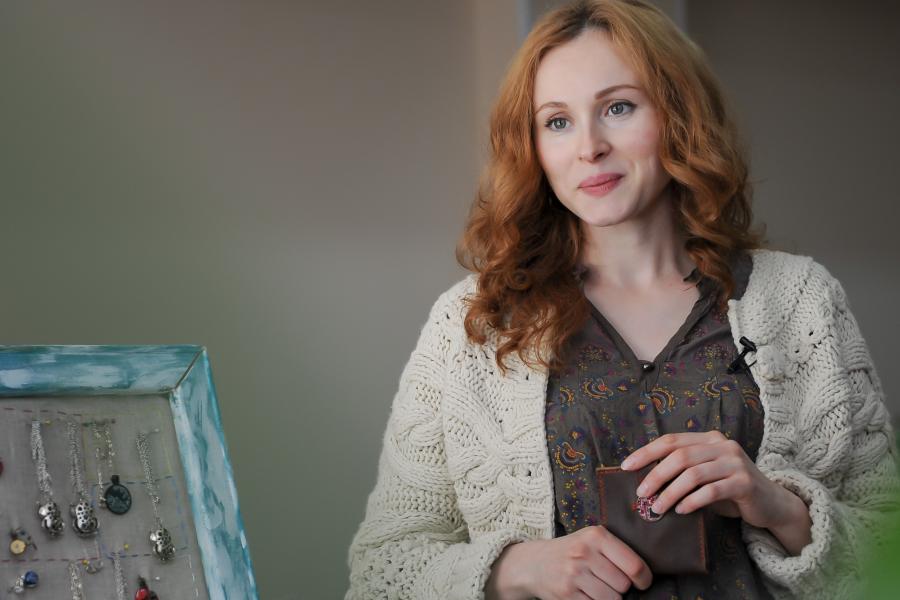 Carolina’s handmade business was born together with the first child, and its reorganization happened when she was pregnant with her second daughter.
Photo | UNDP

This young woman manufactures earrings, bracelets and rings from computer boards and chips, and sells her products in Moldova and abroad. For her work being extremely elaborately, she makes a good use of the equipment procured from a grant offered by the European Union.

Carolina has been making bijouterie ever since she can remember, but she has never thought of it as a business. Therefore, she went to study at a philology faculty in Romania, and worked as an English translator after the graduation. But while on maternity leave with her first child, her passion for handicrafts finally dominated. “I had a big bag full of coconut shells, and thought it would be a shame to throw them, so I decided to recycle them. I took a piece and polished its surface with an instrument I found in my father’s garage, I rounded and dyed it, and there was it – a brooch,” she says.

This first success encouraged her, and Carolina went on manufacturing more and more sophisticated adornments. A few years later, she started using old computer boards and chips, while no other craftsperson in Moldova uses them for making bijou. The idea came to her mind when she found a few computer chips in her brother’s shop. “They were so beautifully coloured – green, yellow and blue – that I got instantly fascinated. They were like cities seen from the outer space to me.”

She set her mind to transform them into bijou, but she could not yet figure out how to cut the desired shapes from these pieces of metal. Her biggest issue was that she did not have the needed instruments. The solution was found again in her father’s garage: this time she experimented with two angle grinders. It took her several months to learn how to carve bits out of chips; it turned out to be quite challenging, because she was never sure whether she could get the expected result.

Later she would save enough money to buy a professional machine, yet it turned out to be forged. “Once, a part of it went off while I was working. So, I just dropped it down as it was, still plugged in,” witnesses Carolina.

A chance to open her own modern equipped workshop was offered by the Support to Confidence Building Measures Programme, financed by the EU and implemented by the UNDP.

While her handmade business was born together with the first child, its reorganization happened when she was on maternity leave with her second daughter. To obtain the grant, she applied at the call for proposals, along with hundreds of young people from both banks of the Nistru River. Carolina is convinced that she managed to win it because of her exceptional business and well-thought business-plan. With over 100,000 MDL of grant money, she bought 13 instruments, as well as various mounts, accessories and all sorts of cutting, polishing and drilling tips.

Equipped with new instruments and knowledge obtained through trainings organized by the project, she managed to develop her business substantially. As a result, time spent on manufacturing one item reduced, while the production steadily grows. Now the young entrepreneur sells her products domestically and abroad. Her handmade opera reached the US and Denmark. Most of her fans, however, live in the UK, where from she receives numerous orders.

A good portion of raw materials come from those who appreciate her work, but also from those who care about the environment and know no other methods to recycle their old computers. “I receive computer chips even from abroad, and the clients tell me exactly what type of bijou they want manufactured from them.”

In the future, she wants to expand her business by opening a collection point for electronic wastes, including their transportation to special recycling stations.

Today, Carolina produces not only bijou items, but also wallets, key-holders, bookmarks and other items of various forms and colours. Besides, she also has a small biocosmetics production.

Carolina Portarescu is one of over 70 young people from both banks of the Nistru River who won European grants of up to EUR 13,500 for start-up or development of their own business. Also, these young people also benefitted from consulting services for 14 months, whereby personal consultants helped them run their businesses efficiently.

The Support to Confidence Building Measures Programme, financed by the European Union and implemented by the UNDP, contributes to increase the confidence building between people living on both banks through involvement of representatives of businesses, local communities and civil society in joint projects aimed at development of business and social infrastructure.