Mission 1.5 is possible: 61% of people under the age of 18 in Moldova say climate change is a global emergency

Sixty-four percent of people worldwide believe climate change is a global emergency, despite the ongoing COVID-19 pandemic, according to the UNDP's "Peoples' Climate Vote". In Moldova, sixty-one percent of young people below 18 years share the same position. 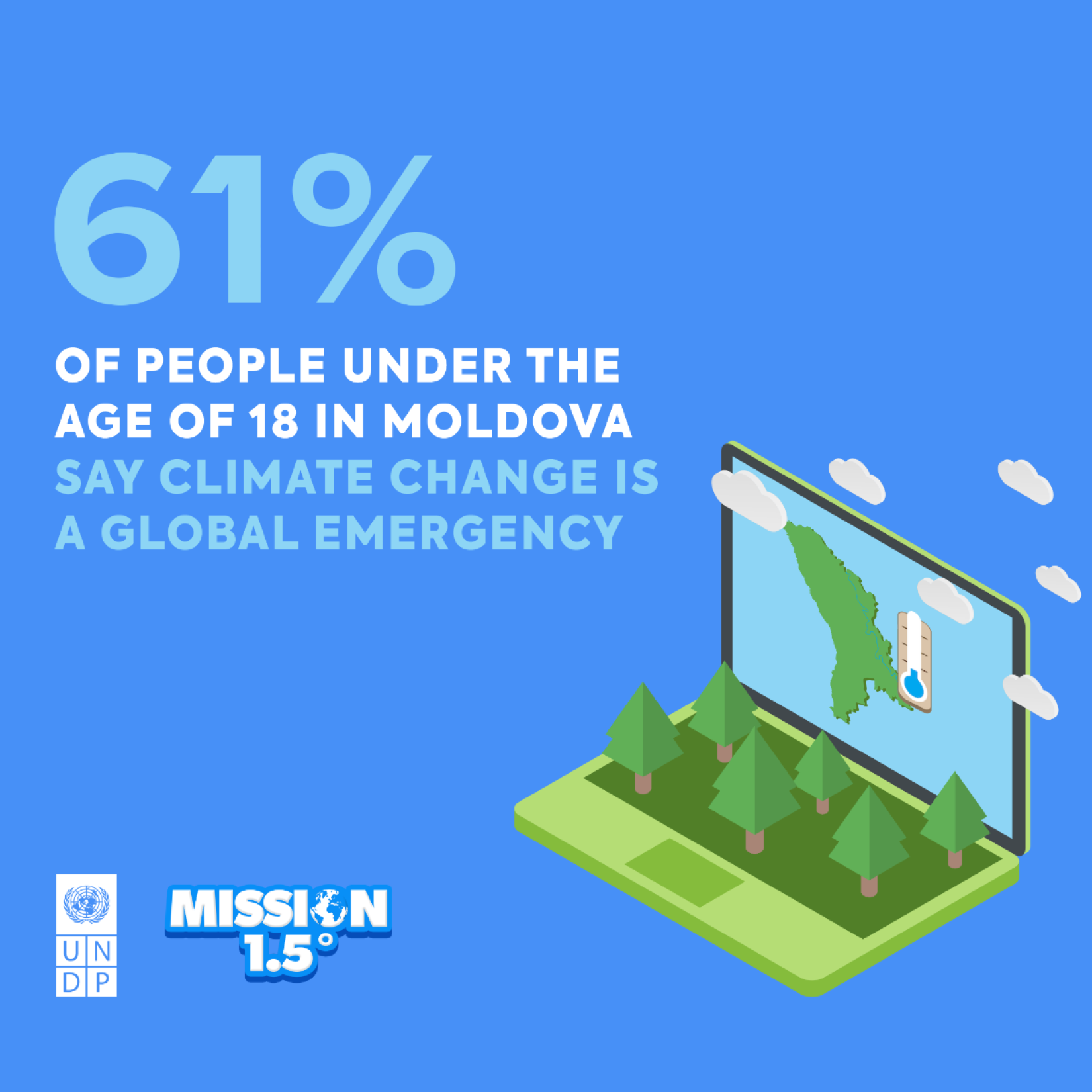 Detailed results broken down by age, gender, and education level will be shared with governments around the world by the United Nations Development Programme (UNDP), which organized the innovative poll with the University of Oxford. In many participating countries, it is the first time that large-scale polling of public opinion has ever been conducted on the topic of climate change. 2021 is a pivotal year for countries’ climate action commitments, with a key round of negotiations set to take place at the UN Climate Summit in November in Glasgow, UK.

In the survey, respondents were asked if climate change was a global emergency and whether they supported eighteen key climate policies across six action areas: economy, energy, transport, food & farms, nature and protecting people.

UNDP Administrator Achim Steiner said: "The results of the survey clearly illustrate that urgent climate action has broad support amongst people around the globe, across nationalities, age, gender and education level. But more than that, the poll reveals how people want their policymakers to tackle the crisis. From climate-friendly farming to protecting nature and investing in a green recovery from COVID-19, the survey brings the voice of the people to the forefront of the climate debate. It signals ways in which countries can move forward with public support as we work together to tackle this enormous challenge."

The global survey is embedded in the Mission 1.5 interned and mobile-based video game, in which players take on the role of climate policymakers and make decisions to try to keep global warming below 1.5 degrees Celsius.  After the game, players are asked to vote on key climate actions they want to see adopted. This data will be analyzed and delivered to governments, who often lack access to reliable information on public opinion on climate action.

In Moldova, the platform was made available in Romanian in December 2020.

Moldova is among the countries most vulnerable to climate change, with an average annual economic loss of 2.13% GDP. The country’s unique biodiversity is currently threatened by climate change, habitat fragmentation and over-exploitation. Moldova is still highly dependent on fossil fuels and electricity imports as main energy sources. While there is a decrease in the country’s energy intensity, it is still higher than the average energy intensity in the EU countries by 29%.

Moldova is also among the countries most engaged in climate action, being the fourth country in the world to update its Nationally Determined Contribution to the Paris Climate Agreement. So, Republic of Moldova has committed to unconditionally reduce the greenhouse gas emissions up to 70% by 2030, compared to 1990 and by 88% conditioned on availability of technical, financial and technological support. The sectors most vulnerable to climate change are agriculture, water resources, forestry, health, energy and transport.