Study on efficiency of anticorruption expertise: Private interests still interfere in the legislation of the Republic of Moldova 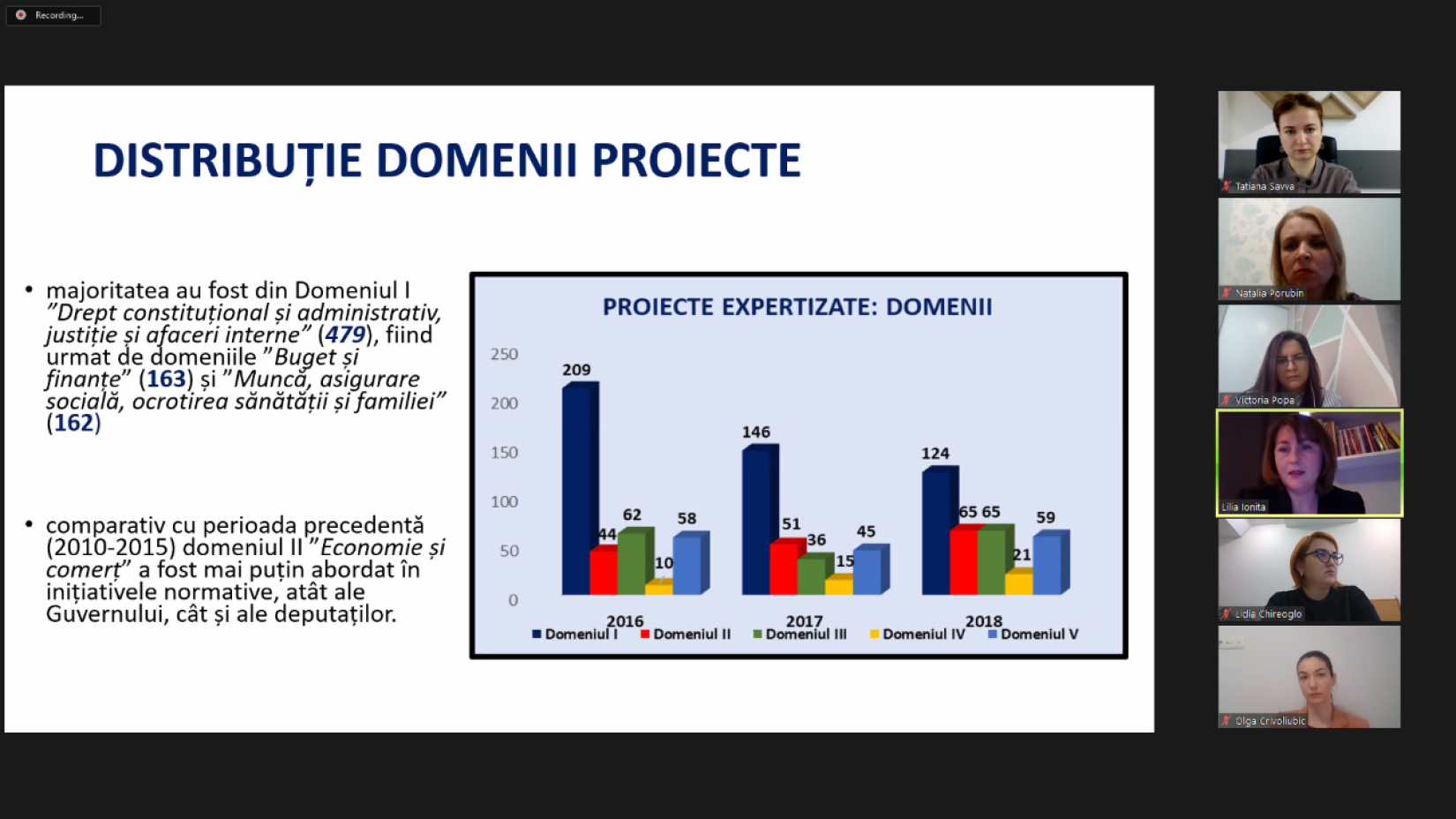 The authors of the study have analyzed the way in which public authorities enforce the provisions related to anticorruption expertise – a corruption prevention tool, which assesses to what extent the content of legislative and normative drafts comply with national and international standards. At the same time, based on this expertise, NAC identifies the provisions which favor or may favor corruption and develops recommendations for excluding them or diminishing their effects.

During 2016-2018, the National Anticorruption Center provided anticorruption expertise for 2697 normative drafts with the biggest share of draft government decisions and draft department acts.

According to the study’s authors, the private interests were most frequently promoted through draft laws: most of them were registered in 2016 (34% of draft laws were subject to the anticorruption expertise), reaching the share of 10% in 2018; as for government decisions, the share of drafts promoting such interests accounted for 21% in 2016, reaching 3% in 2018; and in case of draft department acts - 28% (in 2016) and 7% (in 2018).

The study also revealed that none of the interests’ promoting drafts had relevant, adequate and sufficient reasoning, and when authors’ interests demanded it, they were not accompanied by any regulatory impact analysis. At the same time, most interests’ promoting drafts did not include any control and sanction mechanism. The most frequent risk factors are ambiguous formulations which admit abusive interpretations, competing legal norms, legal gaps, mandates allowing derogations and abusive interpretations, etc.

The corruption risks determined by NAC experts in the draft laws subject to anticorruption expertise include abuse of office, conflict of interests and/or favoritism, active corruption, trading in influence, exceeding official powers, exercise of undue influence.

The efficiency assessment of anticorruption expertise reports’ recommendations reveals that such recommendations are accepted in 70% of cases. Nerveless, the risk factors which are most frequently removed from the draft normative acts are those which may be tackled rather easily and refer to legislative coherence and linguistic formulation of drafts’ texts. At the same time, the authors did not remove consistently and coherently the risk factors from the category of exercising the duties of public entities, extensive regulatory duties, parallel duties, non-determining the responsible public entity/subject to which the provision refers, as well as lack/ambiguity of administrative procedures.

The authors of the study estimated that the value of the avoided damages to the National Public Budget exceeded 1.3 billion MDL in cases when the recommendations provided in the NAC’s anticorruption expertise reports were partially or fully observed. This fact implies that no public land plots or real estate were alienated, no discretionary tax exemptions were applied. At the same time, when these recommendations were not observed, and drafts with political connotation were promoted, with land plots being sold for a nominal price in the detriment of the public interest, or when incompliant public-private partnership projects were promoted, assets and real estate for over 2.3 billion lei were lost or will be inevitably lost.

The Study on “Anticorruption expertise during 2016-2018: efficiency, costs, impact” was conducted in the framework of the “Curbing corruption by building sustainable integrity in the Republic of Moldova” project, implemented by UNDP Moldova with the support of the Norwegian Ministry of Foreign Affairs. A similar anticorruption expertise efficiency study was conducted in 2016, covering the period of 2010-2015.