In “the biggest village in Europe”: a single mother develops a profitable business from ethno-tourism

Ana Statova, a single mother of two, has recently become a local celebrity in the Gagauzia region of Moldova. 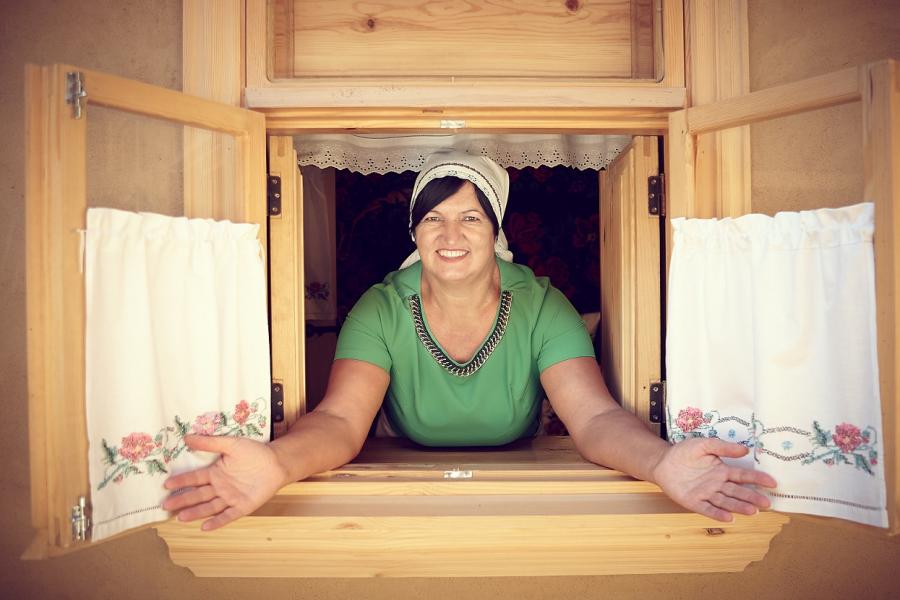 Ana Statova, a single mother of two, has recently become a local celebrity in the Gagauzia region of Moldova. News about the traditional touristic complex “Gagauz Sofrasi” built in the village of Congaz has traveled fast.

Ambitiously named “the biggest village in Europe”, Congaz is proud of the complex reproduces the setting and charm of traditional peasant houses: stoves with heated beds, small wooden windows, small wall-rugs and traditional carpets made of natural wool. During construction, Ana insisted on using ecological materials. The four houses are made of clay and straw walls, with reed roofs that make them warm in the winter and cool in the summer.

Ana wanted the world to know more about the beauty of local Gagauz traditions. “I was always passionate about history and dreamed about helping preserve local traditions and culture, like the dowry I inherited from my mother, and the many traditional Gagauzian food recipes I collected over the years,” she says.

Traditional Gagauz dishes, like shorpa, a spicy lamp soup, or bulgur cooked as pilaf in lamb stock with tomatoes, carrots, onions and red peppers, have been a hit with local and international tourists.

Since the opening in 2016, the staff has grown to 14 women and men. Ana has further plans to keep growing. “A business is like weaving a carpet: to get a beautiful image, you always have to count the fabric wefts and order them carefully one by one,” she says. She is now working from dusk until dawn to establish a Gagauzian wine cellar, where she plans to organize regular wine tasting events.

It’s not easy for women like Ana to run businesses in Moldova. Gender-based discriminations and stereotypes still run deep. Women in Moldova face more difficulties in finding a job, even though they have higher levels of education than men. Even when they do, a lot of them still have to interrupt their employment to take care of children or other family members, often becoming financially dependent on their spouses.

In the region of Gagauzia, only two out of the 26 mayors are women, but the Governor of the region is for the first time a woman, a sign that maybe times are changing.

Ana’s success is also a good omen, an inspiration for many other women from the region. “It is never too late to follow your dreams and it is always possible to change your life in a better way,” she says with confidence.

Ana is one of the 30 entrepreneurs who obtained financial and technical support for their small businesses from the European Union, through “Support for agriculture and rural development in ATU Gagauzia and Taraclia district” Programme implemented by UNDP in Moldova.