The Resident Coordinator Office (RCO) coordinates the efforts of the UN Country Team operating in Moldova to ensure provision of efficient and effective assistance to accelerate the country’s development in line with the Agenda 2030 for Sustainable Development, so it becomes a prosperous and modern European country.

At the same time, the RCO leads the consultations with the Government to define and agree on the UN strategic response to the Government’s development priorities.

The UN RC in a country is the designated representative of the Secretary-General and aims to bring together different resident and non-resident UN agencies, funds and programmes to improve the efficiency and effectiveness of operational activities at a country level and committed to deliver shared results, including through the Republic of Moldova - United Nations Sustainable Development Cooperation Framework 2023-2027.

Mr. Simon Springett assumed his duties as the United Nations (UN) Resident Coordinator (RC) in the Republic of Moldova on 1 October 2019.

Mr. Springett brings 25 years of international experience in humanitarian and development work. Prior to assuming his duties as the United Nations Resident Coordinator in Moldova, Mr. Springett was the Chief Operating Officer and Deputy Director for Response Operations for the UK Department for International Development’s Humanitarian and Stabilisation Operations Team. Mr. Springett served for five years as the United Nations Resident Coordinator, UNDP Resident Representative, UNFPA Representative, and the UN Designated Official in both The Republic of Mauritius and The Republic of Seychelles (2012-2017). Earlier in his career he held several key management positions within the international charity confederation Oxfam and concurrently sat as Trustee or Director for several international non-profit organizations.

Mr Springett has worked extensively across Africa, East Asia, Central Asia, the Caucuses, and Southeastern Europe. Mr Springett holds a Master’s degree (MSc) in Development Practice (Humanitarian Protection) from Oxford Brookes University (United Kingdom), a Bachelor’s degree in Geology from The College of Wooster (USA), and is a member of the UK Royal College of Defense Studies (2007). Mr Springett is a member of the Inter-Agency Standing Committee (IASC) Humanitarian Coordination Pool. 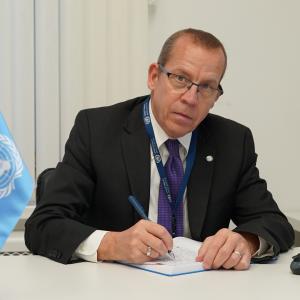