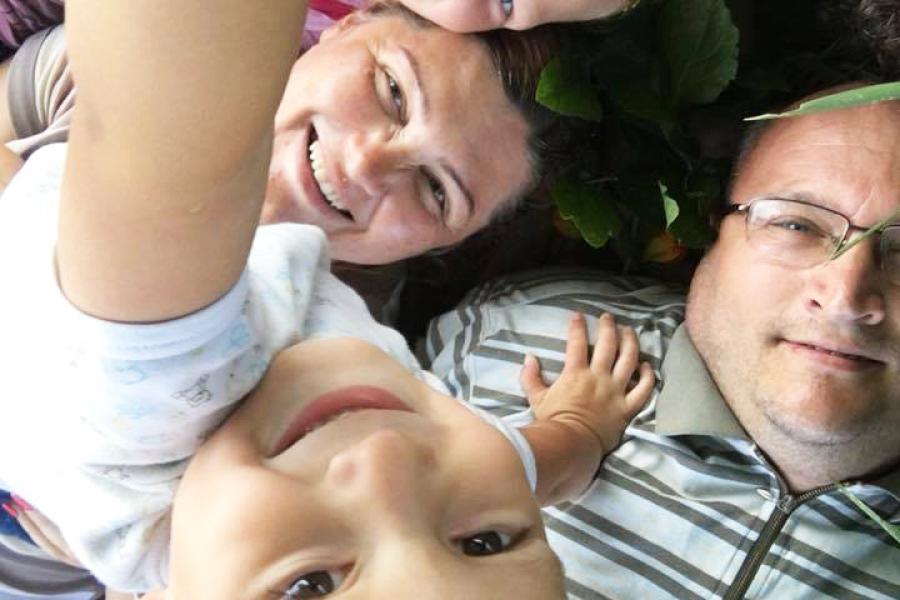 The Labour Code of the Republic of Moldova allows both parents to take childcare leave for a period of up to 3 years. However, the number of fathers who use this possibility is quite small in Moldova, compared to some European countries.According to the data provided by the National Social Insurance House, last year, 7968 men received child-raising allowance for taking care of children under the age of 3. Experts say that one of the reasons has to do with the predominant stereotypes in our society. But the Plamadeala family is a nice example, where both parents took childcare leaves.

Svetlana returned to work, but her thoughts were at home

In 2015, the third child, Teodor, was born into the Plamadeala family. Svetlana's employment contract stipulated a 3-month childcare leave, after which she had to return to work as the UNAIDS Country manager part of the UN Moldova family. As the parents did not want to leave Teodor with a nanny at such a young age, they decided that the father would avail himself of the childcare leave. ‘

My husband has been managing it all by himself: he was feeding him, walking him, changing him, putting him to bed, taking care of him when he was sick. I turned to nanny services after Teodor was 9 months, up to when he turned 2 and went to kindergarten’, says Svetlana. 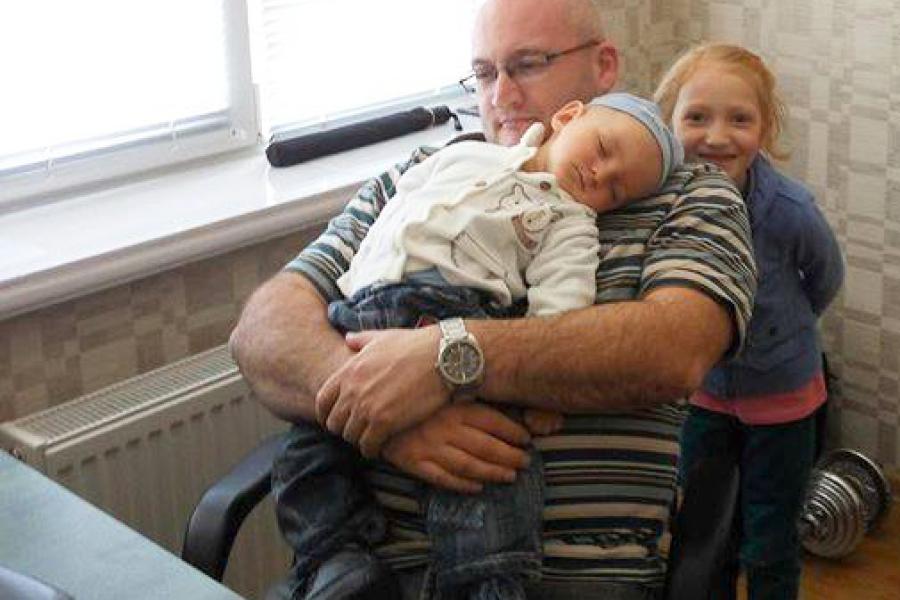 Returning to work was difficult for Svetlana because all her thoughts were about Teodor and how her husband Gheorghe was coping with his parental duties. She used to call home several times a day, reminding her husband to write down into the journal all the meals, hours slept and other important things. After days and days of being all worried, she realised that she had to let it go and trust her husband, who was doing great as far as the child was concerned.

‘Having returned home after the first day of work, instead of saying hello, I asked for the journal.  My husband said he forgot to write it down, but he assured me that everything was fine. And it was. He forgot about it on the second day too, and on the third... About a week later, when the fear more or less dissipated, I gave up on hassling him about the journal, and with it my obsession was cured too. Teo was taken good care of and was growing healthy,’ tells Svetlana.

Gheorghe Plamadeala says that it seemed natural for him to stay at home with the child and he never complained of it being difficult for him. Being the third child and also having a medical degree, he knew what their son needed to grow healthy. ‘It was harder to deal with my wife’s panic and worries who used to call very often to ask how we were doing. As for the rest, having received medical education, I knew when to go to the doctor and when not to, and I enjoyed every moment I spent with my son,’ the man recalls. When Teodor started attending kindergarten, Gheorghe took on this responsibility too, participating in all parental meetings. ‘As to Teo, Svetlana was seen in the kindergarten so rarely that the kindergarten teacher once asked her who she was and what child she was looking for,’ Gheorghe tells amused. 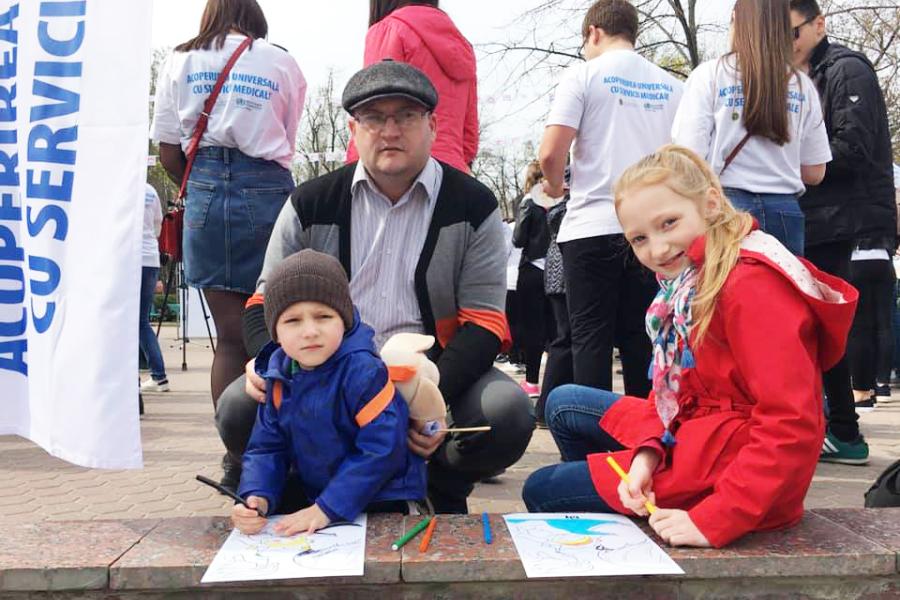 Children grow up harmoniously when both parents participate in the rearing

Ever since they got married, Plamadeala spouses have been equally sharing family responsibilities. When Svetlana was staying at home taking care of the children, Gheorghe would cook and keep the house clean. When she went back to work, he started watching over the children. Both believe strongly that equal participation of mothers and fathers in child-rearing is important to ensure children’s proper and harmonious development.

‘Back in 2012, my husband studied for his master’s degree in France for 10 months. So I took on all responsibilities concerning children, housekeeping, work. My husband used to make us breakfast and this is again the case now, but while he was away, I had to wake up earlier to also make breakfast. I was delightfully surprised to wake up one morning, to my elder son – who was 11 at that time – announcing me at 6 a.m. that breakfast was ready.  I remember that very well. He boiled us eggs. That’s what he could do back then. And I realised yet another time the power of being a role model in child-rearing. I think this is the simplest example that speaks tons about the involvement of both parents in education. Ion is studying abroad now. He is managing very well, including when it comes to cooking.’ said Svetlana, full of pride for her son. 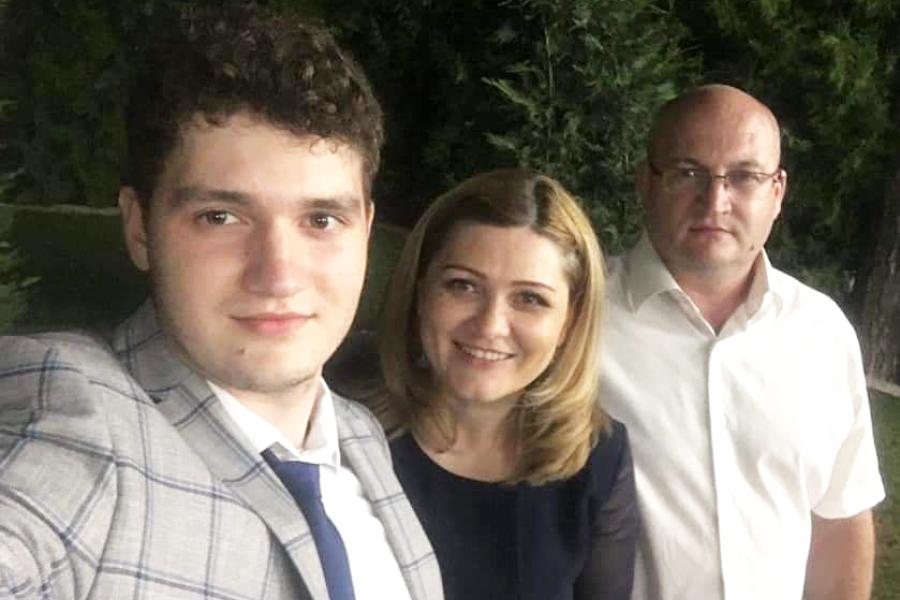 Svetlana Plamadeala with her husband and elder son

“I urge other men to take childcare leave, as this is beneficial for the entire family”

Although perceptions about the traditional roles of women and men improved slightly over the past 10 years, there are still many stereotypes and a lot of prejudice. According to a 2019 survey conducted by the ‘Partnership for Development’ Center, 73% of the respondents saw men as the financial providers in a household, nearly 62% believing that women should do the housework. ‘Therefore, in a society where mothers are expected to take care of children, and fathers – to earn money to support the family and to progress their career, gender role stereotypes and preconceptions will continue to endure for yet a long time’, said Alina Andronache, PR and Advocacy Officer at the ‘Partnership for Development’ Centre (PDC).

There were no stereotypes in the case of Plamadeala family, with the employer and people who know them encouraging them in this endeavour. What is more, Svetlana was also allowed to have a flexible work schedule, according to which she could go to work one hour later and leave one hour earlier. The experts say that if the employers are not flexible and do not want to allow men enjoy their right to childcare leave, then they can file a lawsuit. ‘In our case, we had no problems because I know very well what the law says and I know my rights. I haven’t noticed stereotypical behaviours among our neighbours or other parents when we are at the playground because our child is our number-one priority, and what other people think doesn’t matter.  I urge other men to use this right, as this is a very important and beneficial time for the entire family’, said Gheorghe Plamadeala.

‘Unfortunately, in most cases, women are expected to take on childcare and housekeeping responsibilities, despite also having a job,’ said Alanna Armitage, Director of UNFPA's Regional Office for Eastern Europe and Central Asia, in a recent statement. To tackle this matter, the UNFPA is running a new regional project, with support from the Austrian Development Agency, involving both the private and the public sectors of the Western Balkans and the Republic of Moldova in the pursuit to change social norms and give women more options to choose from, thanks to gender responsive family policy. ‘This is meant to provide a broader range of childcare options and the possibility to have a flexible work schedule, so that women could have more opportunities regarding their family and their job, which is expected to be beneficial for everyone.’

‘The equal involvement of men and women in child-rearing is also advantageous for demography, as it contributes to reaching the desired number of children. Therefore, both the Government and the private sector need to allow a flexible work schedule for parents. Such measures proved to be efficient in other countries, as their experience showed, and the UNFPA is providing the necessary support to make the changes happen in the Republic of Moldova too’, said Eduard Mihalas, Population and Development Program Analyst at UNFPA Moldova.

There’s no country with complete equality on this matter. However, other countries adopted mechanisms and measures to motivate fathers to take childcare leaves by introducing a period of childcare leave dedicated exclusively to fathers or by allowing them the flexibility to choose the length of their childcare leave. According to the data provided by the PDC, Sweden is the country with the greatest number of fathers taking parental leave – 44%; while mothers account for 56%. In Iceland, parents can take 39 weeks of parental leave, of which 13 are meant exclusively for fathers, another 13 – exclusively for mothers, the remaining weeks being then shared between parents. The Norwegian parental leave system allows for 46 or 56 weeks of childcare leave, depending on the selected payment scheme. Of these, 12 weeks belong to mothers, while the remaining 22 or 32 are shared between parents. In Portugal, the first 42 days (out of 130 or 150) are saved exclusively for mothers as maternity leave, and the remaining days can be shared between parents.

Note: Childcare leave is not the same as parental leave. The former lasts for three years and is provided, on an equal footing, to either the mother, or the father, as the family decides. Parental leave is granted to fathers for 14 calendar days within the first 56 days since the child was born.