The aim of the “Safe House Saves Lives” campaign - carried out in the cold season 2019 – 2020 - is that inhabitants from five Moldovan districts - Cantemir, Criuleni, Hincesti, Leova and Ungheni - are more aware of the measures to prevent and mitigate climate and disaster risks. Additionally, 990 smoke detectors are installed in vulnerable households in all five districts. Back to back a video spot and information materials is produced. The video spot will be also broadcasted regionally to raise public awareness of fire prevention measures. 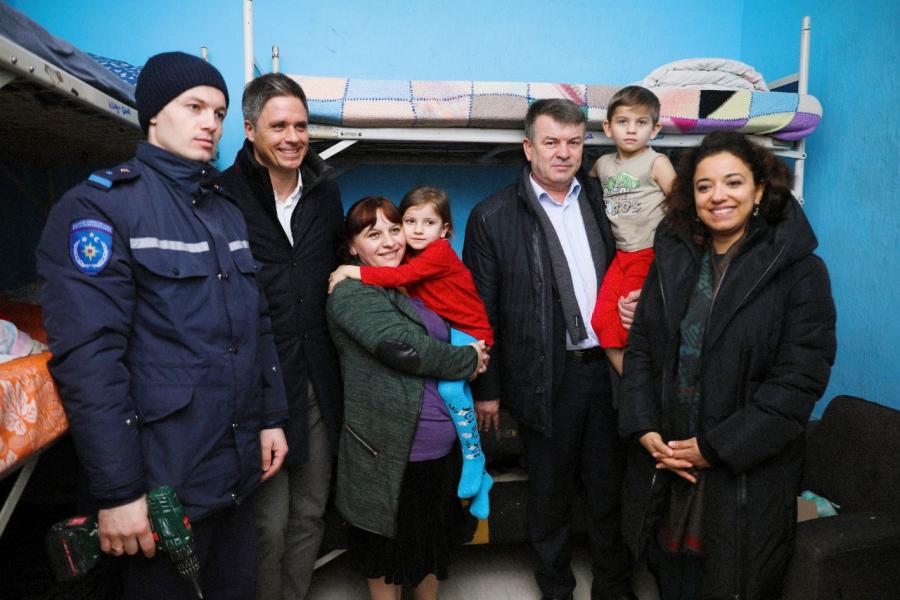 The campaign “Safe House Saves Lives” is implemented by the General Inspectorate for Emergency Situations in partnership with UNDP, with the financial support from the Austrian Development Cooperation within the “Reduction of Climate Risks and Disasters” project.

The batch of smoke detectors were installed today by the firefighting and rescue teams in households from Sarata-Galbena village, Hincesti district. The Ardeleanu family were among the beneficiaries.

“These devices are very good and should be installed in all the houses, especially in villages, where we use wood-based stoves for heating and cooking. A fire could happen in any household, nobody is exempted from such accidents, but from now on we will be able to sleep without worries, as something will warn us in case of fire. It rings loud enough to wake the dead,” said Ana Ardeleanu, 71 years old, after being explained by the firefighters about the functioning of the smoke detectors.

The firefighters have also informed the owners about other fire protection and safety measures and distributed information materials.

“I heard about many cases when people got poisoned with carbon monoxide without even being aware of this, as it has no smell, taste and one cannot see it, but it is toxic. Some have passed away while sleeping because of this. I am glad that we have such a warning device installed in our house, as it is a good method to protect the entire family,” said Zinaida Lungu, mother of 11 children, another beneficiary of the project.

Counsellor Alexander Karner, Head of the Technical Cooperation Coordination Office at the Austrian Embassy in Chisinau, mentioned that this donation is part of a larger assistance program benefiting the Republic of Moldova, for preventing and mitigating climate and disasters risks.

“Awareness raising campaigns are a powerful tool to make people aware of hazardous implications of climate change such as fires. Disasters may be significantly reduced if population is well informed. We, Austrian Development Cooperation assures, that we will continue to support actions meant to increase communities’ resilience to prevent disasters due to climate change in short, medium and long term.”

Natural and man-made disasters annually affect thousands of people and causes huge material damages and loses. According to the data of the General Inspectorate for Emergency Situations, in 2019, over 1675 fires occurred in Moldova, as a consequence of which 124 persons died, out of which 5 children; and material damages accounted for over 68 million 630 thousand MDL.

“This is the reason why specific measures are necessary to prevent and fight fires, such as raising public awareness, installing smoke detectors warning the dwellers about the danger of getting poisoned with carbon monoxide and the risk of getting a fire. In this context, I encourage all people to be responsible and comply with fire regulations, and IGSU employees are always ready to intervene,” said Mihail Harabagiu, Head of the General Inspectorate for Emergency Situations

Dima Al-Khatib, UNDP Resident Representative in the Republic of Moldova, noted that the frequency, as well as the intensity of disasters have increased over the last decade, hence making it necessary and more urgent to implement policies and actions for risk management and prevention.

“The fire awareness campaign is one of such actions and it is intended to build a culture of safer living in rural communities of Moldova, especially in the circumstances that, according to the 4th National Communication on Climate Change, fire risks, especially during the summer season, will become more pronounced in the period of 2021 – 2050, and the trend will be maintained by the end of the century,” said Dima Al-Khatib.

In the next two years, ADA and UNDP will contribute through the “Reduction of Climate Risks and Disasters” Project to the rehabilitation and equipping of community firefighters’ stations from five beneficiary districts. Also, local volunteer firefighting and rescue teams shall be created, including in Sărata-Galbenă village. The priorities of adaption to climate changes and management of disaster risks will be integrated in the local development plans of those five communities in a participatory and gender-sensitive way. At the same time, rainfall water harvesting basins will be built in Cantemir, Criuleni, Hincesti, Leova and Ungheni districts as a measure to increase rural communities’ resilience and adaptation to climate changes and disasters.