Since last spring the kindergarten switched to a biomass heating system and hot water produced by solar energy. 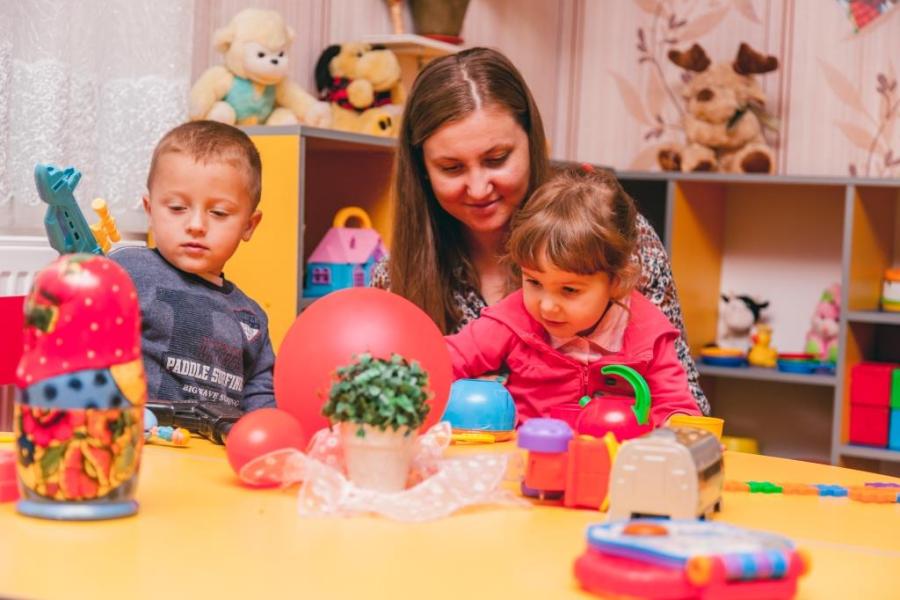 The investment of apr. 67,000 EUR was made possible thanks to the assistance provided by the European Union under the Moldova Energy and Biomass Project. The new technology will produce hot water and will heat all the rooms of the kindergarten for 136 children and educators.

The building of the kindergarten “Izvorasul” was built in the 1970’s and due to insufficient resources, it was closed for many years. The Town Hall reopened the kindergarten 16 years ago. The old heating system was not working and, as a solution to the problem, fireplaces were built to heat at least some rooms in the kindergarten.

Children were freezing in the morning, although the fireplace was started at night. The kindergarten has more than 2,000 m2, but many classes could not be used because it was too cold. As a result, the same room served as classroom, dormitory and locker room. In winter, the water would freeze in the bathrooms. The educators were forced to use electric heaters to warm up the rooms, which toped up the electricity bill. The little ones had to use the outside WC in summer and winter. The colds and flues were happening so often that some parents could not go to work and had to take sick leaves to care for the children. Many generations of Chetrosu village grew in such conditions.

In 2017, the kindergarten of Chetrosu village launched the construction of a modern biomass and solar energy system for heating and hot water. The installation of two pellet-based boilers (250 kW total capacity) and of solar collectors accounted for EUR 66,950 which were supported financially by the European Union. The community contributed with MDL 325,830 (or about EUR 19,239) which were used to enhance the energy efficiency of the kindergarten building: changing doors, windows, etc.

Thanks to the new heating system of the kindergarten, the building came to life. The beds were returned to dormitories, and the rooms have more space for educational activities. Children and educators can use the concert hall for plays or sports competitions.

The hot water is not a luxury anymore thanks to the solar energy panels that heat enough water for both bathrooms and kitchen.

Mariana Ciuchitu is one of the parents who enrolled her children at the kindergarten this year. Her son, Teodor, will enjoy better conditions unlike his older brothers and sisters. “It was very cold in the rooms. In the morning, especially on Mondays, it was as cold as outside. I dressed the children in warm clothes, but they would still get sick.”, said Mariana Ciuchitu. She remembered how children were forced to sleep two in one bed because otherwise the beds would not fit in the few rooms heated by fireplaces. “I am delighted that Teodor will have better conditions. He will not freeze; he would be able to wash his hands with hot water, and it means he will have better immunity and will be healthy.”, declared the woman.

“I will gladly bring Anastasia to the kindergarten because I know it is very nice here. It is completely different than before. Children would come for a few days, and afterwards we had to treat them for weeks for cold and flu.”, said Victoria Furtuna, parent.

The educator Silvia Pascaru works at the kindergarten for more than 15 years and she said that the institution has never had such good conditions. “The new system was tested in the last weeks of the heating season and we ‘tasted’ the pleasure of having heating. Children can sleep in dormitories, and not in the classrooms. Now it is warm and nice.”, said the educator.

Valeriu Grosu used to be responsible for heating the fireplaces and before the biomass heating system, he would start working at 2:00AM. “I had to chop the wood and start the fire. I was freezing because inside it was as cold as outside.”. Although he worked very hard, the temperature in classrooms would not exceed 10-12C in the morning. Things have changed dramatically since. “It is hot and nice with the new system. I am happier as an employee – I sit at the computer and monitor the system. Periodically, I have to add pellets to the boiler and clean the ash.”, said the man.

Aurelia Doschinescu, the director of kindergarten “Izvorasul”, claims that the heating system was tested in April and savings are obvious. “We had to spend lots of money on wood, coal and electricity and we could heat only few rooms. But now, this money can heat the entire kindergarten.”, said the Director.

Ion Prodan, mayor of Chetrosu village said that the project was very beneficial for the village and children who go to kindergarten “Izvorasul”. “European Union helped us achieve our dream – provide better conditions for our children and staff of this institution.”, stated the mayor.

The kindergarten “Izvorasul” is one of two institutions active in Chetrosu village – a locality with more than 5,000 residents. The institution has 112 children. After renovation, the administration received more applications from the parents, and it has to prepare the rest of the rooms to be able to enrol more children.

At present, 236 kindergartens, schools, health centres are connected to biomass heating systems funded by the European Union under Moldova Energy and Biomass Project.