Less than 1% of 612 assessed polling stations are fully accessible

On August 14, 2019, the Central Electoral Commission and UNDP Moldova have presented the results of the accessibility assessment of a series of polling stations. The event was the first of the recently launched campaign “Equal access for all abilities in polling stations”. According to the study findings, out of 612 assessed polling stations - 432 stations are inaccessible, 174 are partially accessible and only 6 are fully accessible. 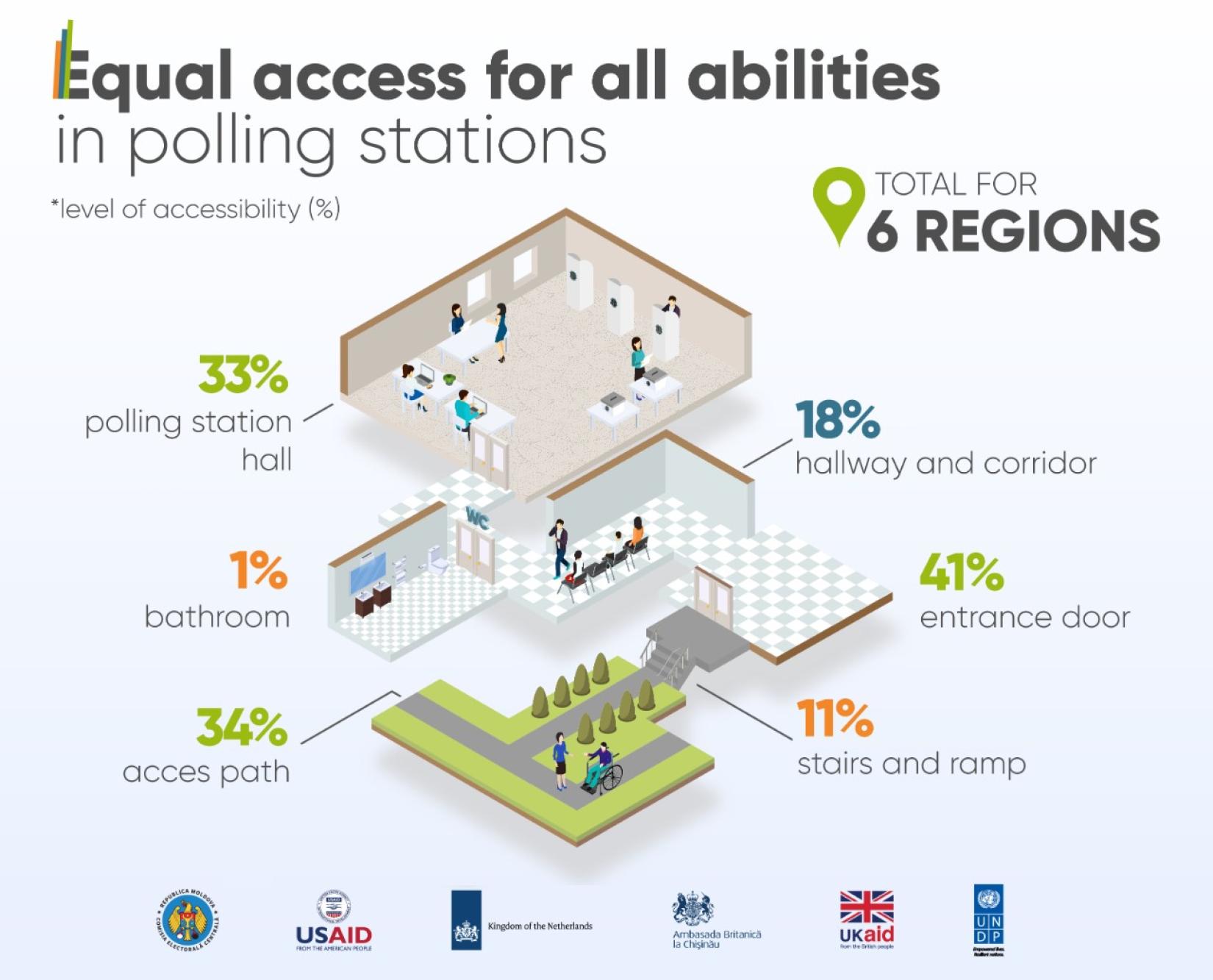 The study was conducted at the request of the CEC and UNDP Moldova, by the local NGO “INFONET” Alliance and its partners, who assessed, during the last three months, the accessibility of 612 public buildings in six regions of Moldova (Edinet, Hincesti and Causeni districts, Chisinau and Balti municipalities and Gagauzia region), which represent more than 30 percent of all polling stations.

The assessment was conducted by accessibility evaluators, volunteers and NGO staff from the targeted regions, of which some being persons with different disabilities.

“For many years I have encountered accessibility issues. That time I did not know what to do and did not know how I could change by myself the situation. Today I can change the situation in my community. In our team we are several persons from Edinet and by common efforts we shall make public buildings more accessible. The life of people with disabilities cannot be separated from political life. We are part of this country and we are involved in what happens, voluntarily or involuntarily. Therefore, we should have equal access to the polling stations, where we can vote and get involved in the development of democracy,” said Emma Matreniuc, accessibility evaluator from Edinet.

The assessment was focused on the following components of the polling station:

During the event opening, Dorin Cimil, Chairperson of the Central Electoral Commission, noted: “So far, no study or documents revealed the level of access to public buildings and, specifically, to buildings that host polling stations. Together with UNDP Moldova, the partner of the Commission, we have decided to assess the accessibility of over 600 polling stations, which is a premiere for Moldova. Considering that, in the long-term, the Central Electoral Commission’s goal is to assess all the 2,000 polling stations across the country, today’s result is a first step to achieve this major objective”.

Andrea Cuzyova, UNDP Moldova Deputy Resident Representative, mentioned: “Although the right to vote is a fundamental one, some citizens, especially voters with different types of disabilities, still face a series of obstacles when it comes to freely exercising their right to vote. Considering the preparations for the upcoming general local elections, I am convinced that the main findings and recommendations of the study to be presented today are of a particular interest for decision-makers and stakeholders at the central and local level, and certain activities will be implemented to ensure the accessibility of the polling stations during the upcoming elections”.

The study “Equal access for all abilities in polling stations” was developed in the framework of the “Enhancing democracy in Moldova through inclusive and transparent elections” Project, implemented by UNDP Moldova with the financial support of the United States Agency for International Development (USAID), the British Embassy in Chisinau through the Good Governance Fund and the Embassy of the Netherlands through the Matra Program.